In todays addition to North of the Border James shares some interesting local articles relating to the Vancouver food cart scene.

Ian Bailey of The Globe and Mail wrote an interesting piece about next year’s program. The city may be trying different ways to implement cart ‘pods’ (groups of 4 or more food carts in one location) on private land as well as unused city-owned lots downtown. 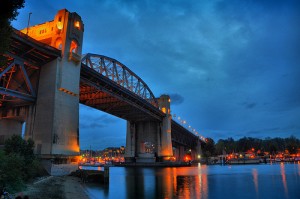 I’d love to see a hybrid of street-side vending along with Portland style ‘pods’ in the city for next year!

Maclean’s magazine features an excellent article on America’s food cart fever reaching our borders. It mentions the frantic pace that the scene has evolved from its L.A. origins. Vancouver is mentioned alongside Edmonton as Canadian cities to watch in the emerging scene.

James Tabbert is a writer, musician and co-founder of vancouverstreeteats.ca. A lover of all things street food, he worked in film and television in Toronto before making Vancouver his permanent home in 2008.