Not your typical food truck experience

MARIN COUNTY, CA – I think the only surprising thing about Food Truck Crush at Larkspur’s Ferry Terminal is how long it has taken Marin to finally get on board with this sensible and tasty revolution. 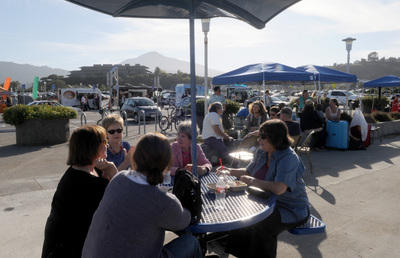 Anyone familiar with mobile food vendors knows these are not the “roach coaches” of yesteryear. Banh mi sandwiches; jambalaya; carrot, ginger and coconut soup; pink champagne cupcakes — even curried frog legs — are offered out of these traveling kitchens that are increasingly led by chefs who have opted to forego the costly route of opening their own restaurants, and instead have taken their culinary know-how on the road.

Marin-based Ready, Set Entertainment (RSE) and the Golden Gate Bridge & Transportation District have partnered to bring Food Truck Crush to the Larkspur Ferry Terminal between 4 and 8 p.m. Fridays through Sept. 13. Since May 20 about seven trucks have parked along the eastern side of the large terminal parking lot and served dinner to hungry passengers returning from San Francisco via the ferry.

“Every week Rib Whip, makers of Midwestern-style barbecue ribs sell out,” explains an enthusiastic Jason Holthe of RSE, who hopes the pilot program will expand next season to feature 15 trucks.

One Aug. 12 the lineup included Suzie Q’s Lunchbox (Cajun), Pizza Politano, Rib Whip, Sanguchon (Peruvian), Karma Indian Cuisine and two dessert trucks, Sift Cupcake and Pacific Puffs. We arrived at about 5:30 and though there were a few folks milling around, the numbers steadily increased with each ferry arrival.

Although the tagline for the event reads, “Get Off. Get Dinner. Get Home,” a good number of folks stay and dine at the terminal. David Musgrove of Karma Indian Cuisine noted that of the 200 tickets he sold, the vast majority of his customers requested their food to go.

Vendors have made sure their tasty offerings are easily held by hand; although there are a few metal mesh tables, benches, folding chairs and tents erected for shading, seating is limited. Still, we stuck around.

My son immediately made a beeline for a Margherita pizza ($8) from Politano’s wood-fired oven offerings. He is already familiar with Politano’s ultra-thin, blistered crust and tangy tomato sauce from the truck’s regular appearances at the Fairfax farmers market. I was drawn to Suzie Q’s Lunch Box and was impressed by her extensive offerings — jambalaya ($6), mac and cheese ($5), heirloom red beans and rice ($5), pulled pork sandwich ($6), all with side dishes, and even a bread pudding with chocolate and bourbon sauce; not surprisingly this sold out by the end of the evening. I had to try the muffuletta ($8), a generously packed crusty French bread roll of mortadella, salami, provolone, ham and turkey. What made this sandwich stand out was the traditional olive salad in the mix that added a briny touch with pickled capers, celery and, of course, olives. This version was everything it should be — salty, hearty and impossible to stop eating. It would have been nice accompanied by a beer, but there is no alcohol for sale.

Here is the great thing about these trucks — there is so much variety that everyone is bound to find something he or she likes. My favorite was a lomo saltado ($8) from Sanguchon; it featured juicy marinated chunks of beef sirloin, cilantro, red onion and tomatoes packed into a crusty bun (obviously a slight departure from the classic, which is typically served over rice) and oozed with delicious meaty flavor. The side of sweet potato fries ($4) came with two well-made dipping sauces.

Most of the trucks that night offered primarily meat-heavy options, with the exception of Karma Indian. It had some vegetarian choices, including a vegan chana masala ($8) of garbanzo beans in a spicy curry served on a plate with side of Basmati rice and salad greens. I requested the plate, but most of its Indian offerings can also be rolled up in a wrap.

Find the entire article by Tanya Henry from marinij.com <here>