NYC Law Would Impound Food Trucks For Parking By Hydrants 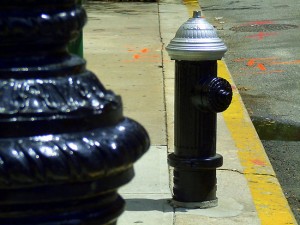 NEW YORK CITY, NY – A bill introduced in the City Council yesterday would make it a lot harder for food trucks to find a spot to sell their delicious wares. Councilmember Margaret Chin is introducing legislation to crack down on food trucks that operate in front of a fire hydrant. The law would prohibit mobile food vendors from operating within 15 feet of a fire hydrant, fining them $250 for a first offense and $500 for a second offense within a six month period—at which point the vehicle would be impounded by the NYPD.

“Every year, when the weather gets warm, I receive complaints about ice cream trucks and other mobile food vendors that park at fire hydrants for hours on end,” Chin says. “Not only is guaranteeing unfettered access to fire hydrants a public safety issue, but the proliferation of mobile food trucks poses very real quality of life issues, including noise and fumes from generators and vehicle exhaust. It is imperative that we update and strengthen regulations as mobile food trucks become more prevalent in our City.”

Finding a lucrative location to park is already one of the biggest challenges facing food trucks, so obviously street vendors are pretty worried about this. Sean Basinski, Executive Director of the Street Vendor Project, tells us, “Right now, under city law, food truck vendors have no place to legally park and serve their customers. That needs to change. Before it starts impounding food trucks, the City should focus on creating parking spaces where vendors can vend legally. We look forward to working with Councilmember Chin and others on this issue.”

Ben Van Leeuwen who operates ice cream trucks and brick-and-morter ice establishments, breaks down why vendors think this proposed law is so ill-conceived:

The logic behind it is questionable. On our ice cream trucks, for example, we use Honda EU3000 generators. They burn 1.5 gallons of fuel in a 14 hour day. This is a minuscule amount of exhaust when compared with regular traffic flow near any of the fire hydrant spots that would be desirable enough for a food truck to park at. Our generators, and those of most other food trucks are ultra quiet. Ours operate at 58 decibels and are then installed in a sound dampening box. Their sound is virtually unnoticeable in a normal New York City street environment.The council woman’s point about “guaranteeing unfettered access to fire hydrants a public safety issue,” also concerns us. There is always someone working on a mobile food truck, therefore it can be moved almost instantaneously in the event that a fire hydrant has to be utilized. A food truck standing at a fire hydrant in fact guarantees this, as it prevents illegal parking. We park at a fire hydrant in SOHO on weekends. It generally takes us an hour to get the spot as people park illegally in front of them while they do their shopping.

It fascinates us to see a bill like this be proposed, as its claimed motive is easily disproven, thus suggesting it being no more than an unfair reaction to a growing stigma against food trucks in New York City.