BOSTON, MA – The Rose Kennedy Greenway’s Mobile Food Fest, which was scheduled for this Saturday and was set to include a plethora of delicacies from at least a dozen local food trucks, has been postponed until spring. 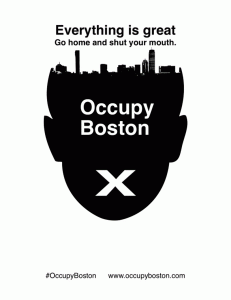 The food truck festival was set to take place on Dewey Square, where Occupy Boston protesters have been living in a tent city for nearly two weeks. The Boston encampment grew out of a similar Occupy Wall Street protest that began a week earlier. Similar protests have sprung up in several U.S. cities, coalescing around the populist slogan, “We are the 99 percent.”

The Rose F. Kennedy Greenway Conservancy decided against letting the food trucks roll in this Saturday, Oct. 15, “based on the fact that attendees we’re anticipating for the Greenway Mobile Food Fest, when combined with the Occupy Boston encampment on Dewey Square, would simply be too crowded to be considered for the public,” said the Greenway’s executive director Nancy Brennan in a statement.

The Greenway Conservancy said the festival will be rescheduled for a date in early 2012.