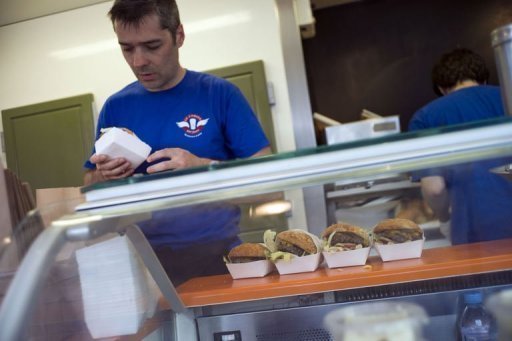 A vendor prepares hamburgers as people queue in front of his food truck on June 29 near the National Library in Paris.

Paris, France – In the latest American food craze to catch on in France, Parisians are flocking to US-style food trucks for gourmet burgers, artisanal tacos and other decidedly non-French street foods.

Usually uber-traditionalists when it comes to dining, Parisians have fallen hard for the food trucks, with some queuing for up to two hours at lunch time to sample their wares.

Among the most popular is Le Camion Qui Fume (The Smoking Truck), a burger truck run by California native Kristin Frederick that on a recent afternoon saw a long line of customers waiting for a bite.

“In Paris you can eat very well on the go, but often it’s very expensive. The truck is a good alternative,” said Frederick, who studied at a Paris culinary school and worked in a restaurant before launching the venture.

The truck’s speciality is an eight-euro ($10) hamburger — 10 euros with French fries — made with specially chosen ground beef, aged Swiss or French cheese and caramelised onions.

“I choose the pieces of beef myself to find the ‘real taste’ of meat and fat,” the 31-year-old said.

Le Camion Qui Fume moves to different locations throughout the city and keeps fans posted of its travels through its website. It’s proven so popular that Frederick said she’s planning to launch a second truck.

“It’s a nice change from a ham sandwich” said one client, Myriam, as she enjoyed one of the truck’s burgers.

“To find a good burger in Paris you normally have to go to posh hotels or bars. Here it’s more friendly and relaxed,” added her daughter, Annaelle.

Another popular food truck, Cantine California, launched three months ago and serves tacos and burgers made with organic meat, a rarity in France.