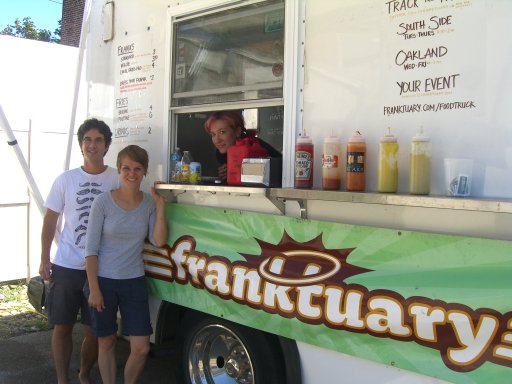 From 6 to 10 p.m., four mobile food vendors — Franktuary Truck, Polish Pierogi Truck, Oh My Grill! and, added Tuesday, Dozen Dessert Truck — will park in the parking lot at 188 43rd St. near Butler Street in Lawrenceville. People are invited to come by and buy frankfurters and poutine, pierogies and other Polish dishes, gourmet grilled cheese sandwiches, and cupcakes for prices ranging from $3 to $8.

Organizer Megan Lindsey, co-owner of Franktuary, says that she hopes to grow the event, as she knows there’s a hunger for food trucks, and knows of some new ones that are ready to launch, including the PGH Taco Truck (it wasn’t quite ready for this roundup).

Pittsburgh has lagged behind some cities in having a variety of food trucks and food truck gatherings, in part because of laws that make it difficult for the mobile food vendors to set up near restaurants and stay in one location long enough to cook and serve food.

Some of the food trucks that the city already has don’t move, such as the ones that park near Carnegie Mellon University.

Find the entire article by Bob Batz Jr. at the Post Gazette <here>