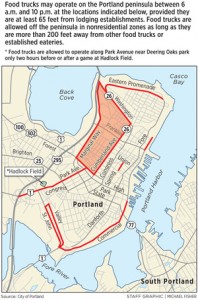 PORTLAND, ME – Food truck owners want Portland to make it easier for them to operate in all city parks, including Monument Square.

But the proposal, which will be reviewed Tuesday by the City Council’s Public Safety, Health and Human Services Committee, is facing resistance from the city staff and at least one restaurant owner.

Mike Roylos, who owns the Spartan Grill in Monument Square, said that allowing food trucks to park in the square and serve food would hurt his established business.

“We’ve been barely able to survive this winter,” he said.

Roylos said he supports food trucks as long as they don’t compete with traditional restaurants, which pay rent and property taxes. Monument Square is lined with restaurants that cater to lunch and after-work crowds.

“It would be nice if they went along with the original idea of having food trucks in areas where there was no food,” he said. “There is quite a bit of food out here.”

Portland began allowing food trucks in 2012, joining a growing number of U.S. cities that have embraced mobile restaurants and providing a new fleet of dining choices to Portland’s foodies and downtown workers.