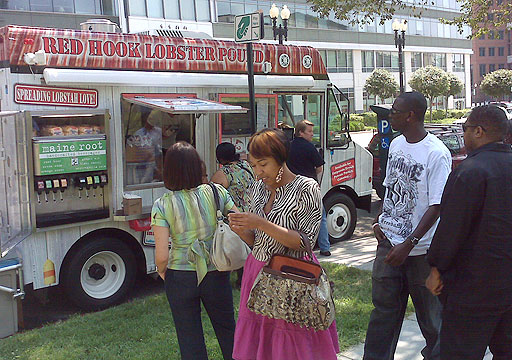 OCEANPORT, NJ – Susan Povich’s road to the Jersey Shore Food Truck Wars championship began with 20 pounds of lobster she brought back from a trip to Maine.

When Povich’s husband, Ralph Gorham, suggested they turn a storefront in the building they owned in Red Hook into a lobster pound, her reaction was a comment you can’t print in a family newspaper.

Wafels & Dinges won the people’s choice award for best truck and the Cutting Edge Cuisine award from the judges. Dellano’s Food Service of Long Valley won the Absolute Classic award for its sausage, onions and peppers sandwich, while Gozen Yogurt won Most Seductive Sweet honors for its chocolate and cake batter swirl, and mango sorbet, flavors. And Lil Dan’s won for Dazzling Presentation.

“We use the claws and knuckles,” a jubilant Povich said afterwards. “They’re the most tender part of the lobster. I don’t use tails because they get too tough.”

Dellano’s sausage sandwich had a big admirer in judge Grace Hanlon, executive director of the New Jersey Division of Travel and Tourism, who described it as “excellent.” She also loved Gozen Yogurt’s cool, colorful creations, calling them “so full of flavor.” The Philadelphia-based truck can be found at the city’s Love Park and on the Drexel University campus.
Lil Dan’s, another Phllly-based food truck, was the runaway winner in the Most Dazzling presentation category; its charbroiled chicken and egg-topped roast pork sandwiches pork were wonders to behold – and eat, too!
Find the entire article by Peter Genovese at nj.com <here>
2017-03-31T08:43:15-04:00By Mobile Cuisine|Off the Wire|