PARIS, FRANCE – Organizers stop short of calling it a food truck. But following the lead of Paris’s hottest new dining destinations, a gastronomy festival has launched a ‘Restaumobile,’ which will serve Michelin-quality meals – on wheels. 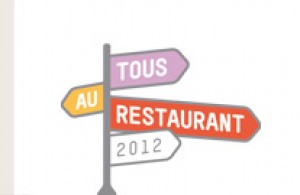 The fact that French culinary titan Alain Ducasse has given his blessing for such a project only serves to cement one of the biggest food trends to excite Parisian foodies. During the city’s “Tous au Restaurant” festival (loosely translated to “Everybody to the restaurant”), diners are being invited to tuck into multi-course lunches and dinners in a makeshift restaurant on wheels — a specially equipped bus –which will park in various parts of the city.

The concept is seen as a riff on the meteoric popularity of gourmet food trucks which have garnered cult-like followings among Parisian foodie types. Cantine California and Le Camion Qui Fume, for example, are seeing mile-long queues for their organic tacos and gourmet burgers à la Americana thanks to write-ups in major publications including Le Figaro and The New York Times.

Other entrepreneurs are also taking the mobile food concept, which has been growing Stateside for several years, and applying it to wine with mobile tasting rooms.