SAN ANTONIO, TX – It is a new trend in several cities across the state and country: gourmet mobile food trucks.

Many of these new, upscale, walk-up servers are owned and or operated by trained chefs. In order for that fine food to be served downtown, those trucks have a lot of obstacles to maneuver around. 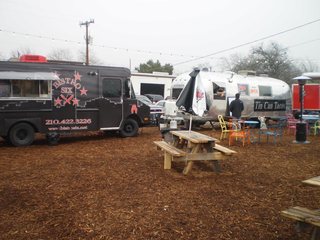 Several restrictions keep the trucks from operating downtown, but the city is about to take a closer look at those ordinances. “That just opens up an entirely new market for all the food truck people. There are so many different spots just at the different parks or near the Alamo,” said Rudolfo Martinez, chef and truck owner.

Part of the resistance is coming from downtown restaurant owners. “We need to discuss it as an industry of where and how it is possible (and) not a knee-jerk type of thing ,” said Yolanda Arellano, the executive director of the SA Restaurant Association.

One of the concerns for the brick-and-mortar restaurants is the economy.

“It has to be done, (but) not at the risk of another person who has been in business for 30 years,” Arellano said.

The vendors don’t think they will take business away but bring more business downtown. “I have a great following. If I bring them to a certain area, they are not always going to want to eat my food, so they may want go to a brick-and-mortar restaurant,” Martinez said.

The SARA also has health concerns. But vendors say they follow the rules just like the downtown restaurant owners.