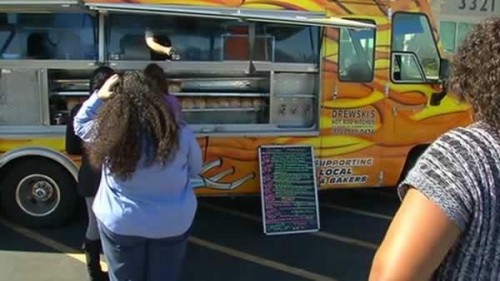 Restaurant owners like Chris Nestor of House Kitchen and Bar, receive surprise inspections, according to Ruiz. “If we were to schedule an appointment, I think there might be some special arrangements that happen as they wait for us,” Ruiz said. “They come in any time they want,” Nestor said. “It is pretty stressful.”

However, Ruiz said mobile food trucks get to schedule their yearly inspections because they are hard to track down.

“These mobile vehicles… it’s all over the board,” Ruiz said.

During an inspection, Ruiz said food trucks don’t have to be open for business, so an inspector could approve a truck to operate without seeing any of the menu items being prepared. Often, the trucks meet inspectors in the county Health Division parking lot. Their counters are often spotless, with no customers to deal with, no employees around and no food on the grill.

KCRA 3 asked how inspectors can approve the trucks without seeing them in action.

“Well, when we do a fixed-facility inspection, it is also a snap shot,” Ruiz said. “So, we rely on a lot of the fixed things we can look at.” Ruiz said some of those things include refrigeration and hot and cold running water. According to Health Division records, nearly 60 percent of the food trucks inspected last year had a least one violation, and more half of them were so critical the truck had to be re-inspected before getting approved for business.

“Can you imagine what it’s like when they are not being inspected?” Nestor asked.

Lisandro Madrigal owns Chando’s tacos. His food truck failed two scheduled inspections in a row last year when he was cited for a lack of hot and cold water. “Things happen, things break,” Madrigal said. “We fixed the issue, addressed it, and made sure we were compliant.”

SIDE NOTE: This is a first for us at Mobile Cuisine, we are stunned that Sacramento has such a high citation rate for food trucks. In most other cities across the country, the citation rates of food truck versus restaurants is usually one that has restaurants receiving a higher rate of citations. If you have this information for your city, please feel free to let us know in the comment section below.