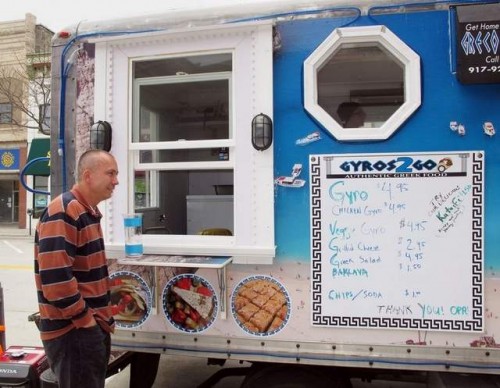 SHEBOYGAN, WI – The Sheboygan Common Council approved a new ordinance Monday night regulating mobile food trucks — but not before amending it to reduce the fee charged by the city and removing restrictions on how late they can operate.

Aldermen voted, 11-3, to amend the ordinance and then 12-2 on the final version, reducing the proposed fee from $500 to $200 and allowing vendors to operate at all hours instead of closing when taverns do.

But Mayor Terry Van Akkeren said there are two or three other truck vendors interested in operating in Sheboygan.

“They’re ready to roll based on our decision tonight,” he said.

Greg Lee, owner of one of the currently operating trucks, Gyros 2Go, told aldermen that fees in much larger cities like New York and Philadelphia were only $150 to $200 and that trucks like his were allowed to operate to 3:30 a.m. on weekends in Milwaukee.

“I think 2:30 would really affect my business,” said Lee, who began operating his truck three weeks ago. “If people don’t want food at that time in the morning, they wouldn’t come to my truck.”

“I feel we are really overreaching,” Ald. David Van Akkeren said. “If this gentleman can sell gyros until 5 o’clock in the morning, I applaud his efforts.”

Ald. Don Hammond said raising the fee from $100 to $500 “seems kind of extreme. This needs to go back to committee and be looked at more closely.”

Ald. Julie Kath, a member of the Law and Licensing Committee that recommended the ordinance, said the committee’s research showed some cities have fees as high as $1,000.

Sheboygan Police Chief Christopher Domagalski argued that Lee’s truck and others should close when taverns do because police are trying to reduce the number of people loitering on Michigan Avenue and in other neighborhoods at those hours.

“From 1:30 to 4 a.m., crime is centered around the taverns,” Domagalski said. “The biggest problem is loitering and congregating outside the bars. I would not like to see people hanging out in those neighborhoods.”

Find the entire article by Dan Benson at sheboyganpress.com <here>