Last June, Flip founder Jonathan Kaplan surprised the tech world by announcing he was launching a grilled cheese company. But Kaplan’s venture, called The Melt, wouldn’t be an amateur, hotdog-stand operation. No, he’d do it with Silicon Valley flair: by hiring Michelin Star-quality chefs, James Beard award-winning designers, and workflow engineers; building a board of directors that includes former Apple retail head Ron Johnson; and raising millions of dollars in funding from Sequoia Capital. 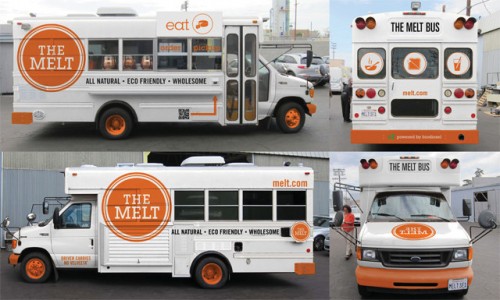 Now Kaplan is taking his fast-casual restaurant concept one step further: the mobile market. Today, the Melt announced it’s going after the food truck industry by rolling out a fleet of retrofitted yellow school buses. The mobile eateries will set up shop throughout cities and possibly suburbs, allowing the company to stake out popular locations and reach new customers. Over the next five years, The Melt will introduce more than 100 buses to the market. Says Paul Coletta, The Melt’s chief marketing officer, “You are going to see us go places that no food truck has ever gone before.”

The Melt’s buses will come equipped with modern, 200-square-foot kitchens that will offer the entire menu from its brick-and-mortar locations–soups, grilled cheese sandwiches, and breakfast options. Customers will have the ability to order online or via smartphone device, enabling them to avoid the hassle of long lines. The Melt’s trucks will rotate from permanent “bus stops” during the day on a schedule which Coletta believes will give customers a sense of consistency. “We’re not going to be chasing customers like traditional food trucks do,” he says. “And it’s not the traditional food truck model where you have to chase the bus depending on what their social media message of the day is.”

Tell us what you think about Melt dropping 100 food trucks into the food truck industry in the comment section below.