NEW YORK CITY, NY – Kimchi Taco, Big D’s Grub, Korilla BBQ and a host of other new gourmet food trucks that have taken to SoHo’s streets have loyal followings that track them via Twitter. But some SoHo residents said they wish the trucks and other food carts would hit the road. 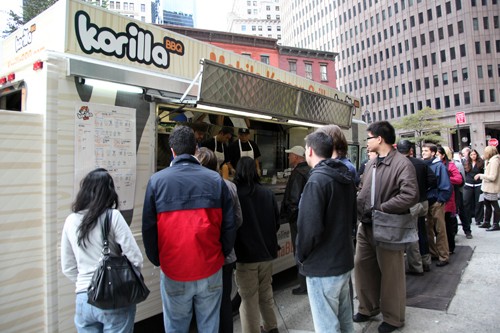 SoHo is the latest in a long line of neighborhoods complaining about mobile food vendors crowding sidewalks, creating garbage problems, polluting the air and seemingly breaking city laws with impunity.

“This has been going on and on and on and something needs to be done,” SoHo resident Peter Davies said at a recent Community Board 2 meeting where locals shared a litany of complaints with representatives of the city’s Health Department, Fire Department and 1st, 5th and 6th police precincts.

James Middleton, the executive director of the city Health Department’s Bureau of Food Safety and Community Sanitation, listed the rules that permitted mobile vendors must follow. They are barred from selling within 20 feet of a building entrance, on a sidewalk less than 12 feet wide or close to a crosswalk or fire hydrant, she said.

But SoHo resident Elaine Young said the city has looked the other way on violations of these rules to prop up the popular trucks and carts.

“The city says ‘give us your money’ and sends all the tourists here, but we don’t have garbage

[pick-up],” she said. “We are a really forgotten community.”

SoHo resident Jamie Johnson also said she was frustrated that these rules were not fully enforced.

During an hour and a half on a recent Saturday afternoon, Johnson said she counted 78 carts and tables on the sidewalks of Broadway between Houston and Broome streets, and she believed many were breaking the rules of where they’re allowed to set up.

A hot dog vendor on Broadway, who did not want to be named for fear of reprisal from the Health Department, told DNAinfo that he agreed with locals about lax law enforcement.

The vendor, who said he had worked in SoHo for more than 20 years, said he measured his distance from the nearest doors and was 32 feet and 20 feet from the two closest. But few other vendors on Broadway follow the rules, he said.

“From Houston to Canal [on Broadway], maybe three carts are legal,” the vendor said.

Halal food cart worker Tareq Islam, 24, said the cart in which he works on Broadway near Prince Street has received roughly eight tickets in the past five months, totaling about $270, for being too close to a bus stop and a fire hydrant in a previous location on Houston Street.

“We know the rules now,” he said, noting that he keeps his distance from corners and fire hydrants.