St. Paul Food Truck Season Almost Over: Who is Still Open and Who is Closed

ST. PAUL, MN – The food truck season is almost over. Last Wednesday was the last food truck court in St. Paul, and today is the final food truck rally until spring. 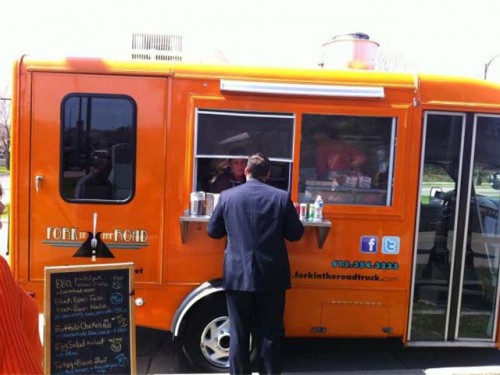 But even as many food trucks shut down for the winter, others are staying open, and some are just getting started. We got in touch with a number of companies to find out who’s still open, who’s closing, and who’s closed.

A few food trucks are looking into the possibility of staying open all winter. “We want the truck to stay tough,” says Mike O’Halloran with the Barrio food truck. They’re considering equipping their truck with heaters for customers.

Fork in the Road will remain open through the winter, as will the Gastro Truck. Ditto Nate Dogs. Check their Twitter accounts for updates on where they’ll be on any given day.

Simply Steve’s also plans to be out around 10th and Nicollet throughout the winter, when it’s above 20 degrees and there’s no snow. “I’m sure I’ll also be on Marquette between Sixth and Eighth,” says owner Steve Ramlow.

Other mobile eateries plan to close sometime in November. Hola Arepa is closing November 4, this Friday. Potter’s Pasties is aiming to finish up November 26. Vellee Deli will announce a date on its website this week and guesses it’ll be “mid-November.”

The Chef Shack is looking at December 1 as a potential last day. “It’s Minnesota,” explains Lisa Carlson. “If it’s nice out we will be out.”

“When people stop coming is what we’ve been telling our guests,” Thoma says. On the other hand, he says, “We serve every night at 1029 Bar, inside, so if people still want a lobster roll they can always come here.”

Some trucks have already closed for the winter.

128 Cafe is closed for the season, as are Dandelion Kitchen and World Street Kitchen, both of which finished up last Friday. Chef Sameh Wadi also suggested to City Pages that plans “might change,” so check their Twitter.