Summary Of Season 3, Episode 5 Of ‘The Great Food Truck Race’

This week’s episode of the Great Food Truck Race brought the four remaining food truck contestants to Nashville, TN. This season is using a new format where instead of the contestants being established food truck owners, each of the eight sets of contestants are novices with absolutely no food truck experience. In fact, some of the competitors have no professional cooking experience at all. Consequently, along with a $50,000 prize, the winning team of this season will be given a brand new food truck to help them start their business. 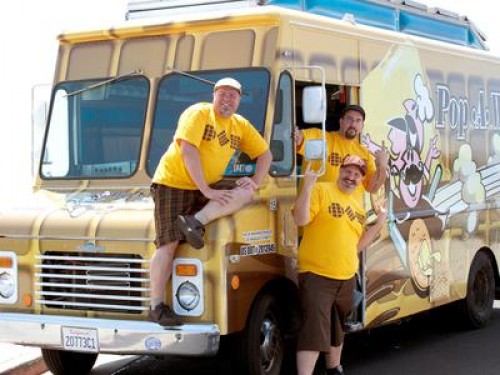 Although the teams originally thought they would meet up in Nashville, their first stop took place forty miles south of Nashville, in Pottsville, TN, the home of country singers-writers Joey and Rory. The teams started with a truck stop. The challenge for the competitors was to create a Southern style picnic lunch for Joey and Rory. The couple would judge the meal and the winner would then receive a special reward. Each team was given $300 in seed money to buy products. The special twist required the teams to shop at a local farmer’s market for food for the picnic. Because Pottsville isn’t quite the largest town in the world, the types of food and variety available was very limited (no butter…how are you supposed to cook Southern style without butter?). Nonetheless, each team worked up different menus. Pop-a-Waffle prepared southern fried chicken, corn on the cob and grilled vegetables. Seoul Sausage chose to stick with Korean cuisine and opted to serve Korean spicy pork empanadas, country potato salad and a deep-fried pie. Momma’s Grizzly Grub created a chipotle chicken dish along with sweet potatoes and cole slaw. Last week’s winner, Nonna’s Kitchenette served an Italian burger, macaroni and cheese and garlic roasted corn.

The judges declared Pop-a-Waffle the winner of the challenge and would take home Rory’s guitar which was valued at $1,000 and the cash placed in their till. Additionally, they were given the privilege of selling at a private party hosted by the country singers. The guest list of friends and neighbors was tallied at approximately 1,500 people, and allowed them to stay at the farm. The other teams would have to travel back North to Nashville.

In Nashville, Momma’s Grizzly Grub decides to park downtown in front of an ice cream shop. Their menu remained the same with tacos and lemonade being their main staples. Nonna’s Kitchenette would also park downtown but chose another location. Their menu included Italian meatball sliders, root beer floats and ice cream sandwiches. Seoul Sausage arranged to set up at an outdoor event in East Nashville and made no changes to their menu. Meanwhile, back on the farm, Pop-a-Waffle was serving their chicken and waffles along with pomegranate lemonade. At the end of the day, Momma’s Grizzly Grub and Nonna’s Kitchenette were disappointed with their sales. Thus, both planned to move locations the following day. Seoul Sausage was pleased with their spot and planned to return for the last day in Nashville.

On day two, Seoul Sausage ran into a problem of getting lost while trying to find a grocery store to stock up in. Nonna’s Kitchenette had an even bigger problem when they hit a car when backing out of a space on a narrow street. Shortly after the accident, Tyler called the teams with their weekend speed bump. The challenge – the chefs would have to tell their teammates to leave the truck. They would no longer be able to work or help out on the truck. Instead they were replaced by culinary art students.

At this week’s elimination, Pop-a-Waffle got their first win. In second place was Nonna’s Kitchenette, even with the $250 penalty they received because of the car accident. In third place and the final team to make it to the next round was Seoul Sausage. This meant that Momma’s Grizzly Grub had to turn in their keys and head back to Wasilla, AK.

Next week the remaining three teams will travel northeast to Cleveland, Ohio.