This week’s episode of the Great Food Truck Race brought the final two food truck contestants to Boston, MA and Portland, ME. This season is using a new format where instead of the contestants being established food truck owners, each of the eight sets of contestants are novices with absolutely no food truck experience. In fact, some of the competitors have no professional cooking experience at all. Consequently, along with a $50,000 prize, the winning team of this season will be given a brand new food truck to help them start their business. 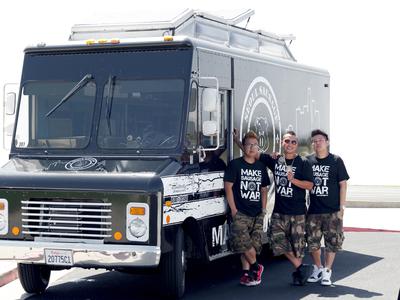 The two remaining teams in the season final were Nonna’s Kitchenette and Seoul Sausage. While on the road, the teams arranged to find a good place in Boston to park their trucks. Seoul Sausage opted to work outside a cupcake shop which was surrounded by retail shops and Nonna’s Kitchenette choose to team up with a local Boston food truck. With $500 of seed money, the teams rushed out to purchase their food supplies. Early on, each team had long lines of customers ready to purchase items from their menus.

Early in the first day, Tyler sprung the truck stop. This week the challenge would be to create a lobster dish. These locals were also to be the judges of this truck stop. The winner of this challenge received a huge advantage and being the finale, this advantage was very important. Surprisingly, neither team was familiar with lobster which made this a difficult challenge. They both kept it simple.

Seoul Sausage created a lobster roll and Nonna’s Kitchenette choose to prepare a lobster cake. The judges turned out to be two local fishermen. They selected Nonna’s Kitchenette as the winner of the challenge. The prize was a bonus of $500 for their till and a three-hour advantage to the next city. Seoul’s Sausage was penalized by having to stay behind to shuck clams. Even with this advantage Tyler announced that Seoul Sausage had better sales in Boston than Nonna’s.

The following day after setting up in Portland, the teams were told they would be moving again, this time to Lubec, Maine, a very small town. The teams were instructed to price each dish under $2. When reaching Lubec, Tyler said the teams were separated by only $5, thus, Lubec would decide the race.

The two teams stood patiently as Tyler counted the money in their cash boxes. Finally after seven weeks of competition, the winner of $50,000 and a brand new food truck was Seoul Sausage. When everything was said and done, they won the title by only $103.

Congrats to all of the competitors in this season’s show. Unlike the first two season, these competitor were truly new to the industry and while making mistakes along their path…each learned how difficult operating a mobile food business really is.