On Friday, the previous site of the New York City icon, Tavern on the Green, became the newest location for New York’s food truck industry.

Tavern on the Green, which closed its doors for the last time in 2009, was one of New York’s finest restaurants which received acclaim and was continually an award winner for excellence and best ambience. The Tavern site was used as the location for the finish line of the New York City Marathon, and even during the 80’s was featured in a Folgers coffee advertising campaign to see if it’s Upper West Side customers could tell if the coffee they normally served was replaced with Folgers  instant. 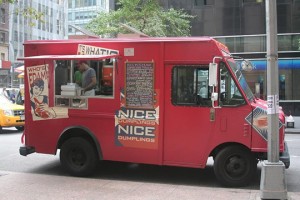 A ribbon cutting ceremony, led by Adrian Benepe, the New York City Parks and Recreation Commissioner marked the opening of a $2.5 million gift shop and tourist center. “The park has long lacked a centrally located visitor center,” Mr. Benepe said, adding that with 35 million visits a year, the park is the largest tourist attraction in the city.

The location where the former Crystal Room stood is now a landscaped terrace holding 80 new tables and 130 chairs. Visitors may now dine from one of the four food trucks that have been permitted to sell their fare at the site. The current truck lineup includes;

Ladle of Love: Soups and salads

Each of these vendors will pay the city from $45,000 to $100,000 over the next two years, to receive the proper permitting for selling here. Within a few months, the parks and recreation department, expects to start extending similar invitations to additional food vendors to widen the food options currently available.

According to Mr. Benepe, the city’s parks “are playing catch-up now, in a city of food and foodies, We’re trying to bring into our parks the same variety that New Yorkers find on the street corners of the city.”

In addition to their food options, the sale of alcohol may be allowed in the terrace area soon. Earlier this week, three of the four trucks appealed to Community Board 7 for the right to serve hard liquor. The plan from the operators of Pera would include vodka, gin, scotch, as well as wine and beer to be sold from their truck. Rickshaw Dumplings wishes to serve sake and beer at this location while Ladle of Love would like to offer seasonal mixed drinks in addition to beer and wine. The final vote from the board will take place on November 3rd.

“I’ve been here for dinner when the Tavern was a special-occasion place,” said Nancy Zelenetz, 53, of Scarsdale. “This is more alive. I thought the dumplings were delicious. Eating here used to be like a commitment.”

The city still has plans to open a full service restaurant around this location, but in the mean time, the food truck industry has just had another avenue opened up to it allowing them to show off what they have to offer.