WASHINGTON DC – In the same month that President Obama’s Supercommittee failed to rise above partisanship for the sake of America’s economy, a hyper-partisan House of Representatives managed a landslide victory. 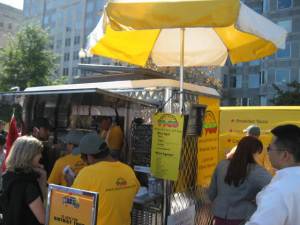 The vote was 407 to 18 in favor of the Entrepreneur Access to Capital Act. If passed, it would allow entrepreneurs to crowdfund. That means they could raise money over the Internet through relatively small donations from people they don’t know. The bill removes barriers to doing business – but this time for the little guy.

The bill heads to the Senate next. It currently allows business owners to raise up to $2 million from an unlimited number of individuals who can invest as much as $10,000 each.

Right now, all sorts of do-gooder causes get donations through engines like Kickstarter.com. But because of a securities law born of the Great Depression to prevent fraud, for-profit businesses can’t ask strangers to invest.

Congressman Patrick McHenry introduced the bill. “What we’re doing is changing a regulation, eliminating a regulation, so that you can let capitalism be free in this country,” he said at a small victory rally last week.

The North Carolina Republican says a fellow Republican told him the bill “should be renamed the Obama-McHenry Friendship Bill.” In fact, a version of the crowdfunding bill is also in the jobs plan President Obama is urging Congress to pass.

Virginia resident Osiris Hoil was at the victory rally. Hoil is a new restaurateur. Laid off from his job as a construction worker, he spent months mulling around at home, cooking for fun and solace.

A neighbor loved Hoil’s authentic home cooking enough to invest $25,000 in a food truck for him – among D.C.’s first. One year later, District Taco has 33 employees, two trucks, and a restaurant in Arlington, Va.

The business is a local staple with a cyber strategy. Hoil tweets daily specials to over 6,000 followers. Around 1,300 eye him on Facebook.

Under current law, Hoil can’t ask any of these followers to become shareholders in his next restaurant. He thinks that’s unfair, and not just to him. “The customers own District Taco, because they build it,” he explains, “I would like for them to get something back.”

The Reward And The Risk

Muriello testified before the House Financial Services Committee in support of the bill. She says it could solve market inefficiency. “You can have great entrepreneurs, communities that want to support them, and yet for some reason those two parties just can’t connect,” she says.

She doesn’t think the bill will spur new abuses. “We don’t see a particularly viable scenario where total strangers are going to wander on to this marketplace and invest in deals from people they don’t know in areas they don’t care about.”

But Jack Herstein is skeptical. He’s president of the North American Securities Administrators Association and investigates fraud for the state of Nebraska. In the typical scam, con-artists “just need a few investors to jump in, spread the word around how great it is, and the next thing you know, the website’s down and the money’s gone.”

The bill could make a bad situation worse by taking regulation out of the picture. It exempts small businesses from registering investment activity with the state. “Once you preempt state law, it is gone,” Herstein says. “It is very difficult to get that back.”

Investing is a risk that District Taco regular Lisa Merman is willing to take, given the chance. “It would be a chance to be a part of it,” she says. “And at a low dollar amount, it’s a low risk.”

Fellow customer Brian Waldman jumps in to testify. “This morning I had a colonoscopy, and the first thing I wanted to have as soon as I left was District Tacos.”

If the bill becomes law and Waldman’ pockets run as deep as his appetite, District Tacos may find itself catering to a whole new crowd.