Business is so good for food truck manufacturer Armenco that the Spring Valley, California-based company is moving to a new factory this fall, where it expects to double its annual output of the rolling kitchens that have revolutionized urban street food in many U.S. cities in the last few years.

It’s one of perhaps a few dozen manufacturers around the country that specialize in retrofitting ordinary delivery vans with broilers, fryers and other cooking equipment. For more than a quarter century before the food truck craze, Armenco specialized in building the catering trucks that have long trolled construction sites and motion picture lots. Its business began to shift toward the more upscale mobile food emporiums in 2007, says Arthur Djahani, general manager of Armenco Cater Truck Manufacturing Co. Inc. 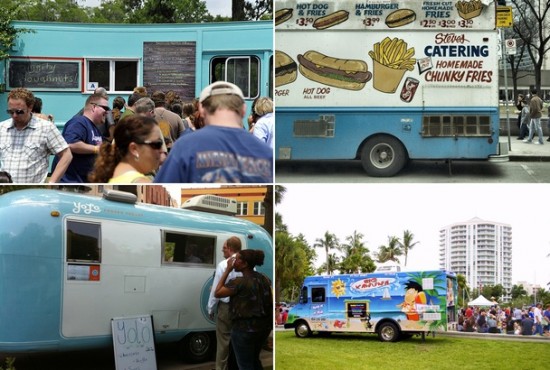 “Our clientele has changed as a result of the changing public perception,” Djahani says. The trucks “used to be known as ‘roach coaches’ with sub-pare fare,” he notes, but today they’ve captured urban imaginations and appetites with a wide array of ethic and gourmet offerings. His company’s customers are now “younger, hipper” entrepreneurs, he says, many with culinary school degrees and a strong grasp of social media.

In the last year or so, demand has been so strong that Armenco hasn’t been able to stock enough new chassis to keep up with orders from independent chefs looking to break into the mobile cuisine business. Besides the truck outfitters, there are permit expediters, menu consultants, lawyers, lobbyists, website designers, marketing professionals, and phone app developers who have managed to expand their businesses thanks to the food truck phenomenon.

Both the food trucks and the minions of consultants and companies feeding off their rapid expansion are “giving people needing to find a new way of making a living a chance to break into a new industry,” says Richard R. Myrick, editor-in-chief of Mobile Cuisine Magazine. Myrick, an architect by training, started his online journal about a year ago after being laid off from a construction industry job. Since then, he’s chronicled the trucks’ rapid growth in the $604 billion a year restaurant industry.

Culinary schools in Florida, Virginia, and North Carolina have added mobile food courses to their curriculum, while other college campuses have added off-the-truck fare to the traditional cafeteria offerings.

For the first time last year, the National Restaurant Association included food trucks in its annual trade show.  Of the restaurant industry’s 70 different segments, it’s the single fastest growing component and one that chefs around the country say they expect to continue to be among the hottest trends.

“It’s definitely a long-term trend, not a fad,” says Hudson Riehle, senior vice president of the Research and Knowledge Group for the National Restaurant Association. It’s a view shared by restaurant rater Tim Zagat, of the Zagat Survey, which has also added food trucks in several cities to its restaurant rating publications.

Not everyone is gung-ho. There have been howls about unfair competition from brick-and-mortar restaurateurs in Chicago, Washington, D.C. and other cities. And it’s unclear whether the arrival of new food trucks on New York City’s sprawling street vendor scene has had a role in driving up the costs of vendors permits, which now run about $15,000 for a two-year period on the city’s black market, about double what they cost a few years ago, says Sean Basinski, director of the Street Vender Project that advocates for the city’s 10,000 mobile businesses, about half of which sell food.

But even Chicago restaurateur Glenn Keefer, a staunch critic of the trucks, say the mobile cuisine craze appears unstoppable.

“They are here to stay but the question is how they are going to be allowed to operate,” says Keefer, who has opposed the introduction of full-service food trucks in Chicago but is now pushing for strict regulations even as he prepares to get into the same business.

“Should it (a change in the law) come down, we’ll be out there with our trucks too,” says Keefer, a move that would follow restaurant chains such as Sizzler and Qdoba Mexican Grill that have already taken up an “if you can’t beat ’em join ’em” approach.

In fact, restaurant industry analysts say that rather than bucking the trend, brick and mortar restaurants increasingly are looking to gain market reach and heighten their public profile by putting their own mobile kitchens on the road. And retailers such as Crate + Barrel have hosted food truck nights in their parking lots on the theory that people who come out for the food may come inside to shop, Myrick says.

So far, most mobile food impresarios are independents offering a range of cuisines – Korean barbeque, giant burritos, lobster rolls – as well as a variety of price ranges and levels of quality control. But a couple of new companies, such as California-based Mobi Munch, Inc. and the Chestnut Ridge, N.Y. based Food Truck Franchise Group, are poised to bring the mores standardized franchise model to the business.

The two companies have another thing in common, too: Both are looking to take mobile cuisine beyond city limits and into suburban areas, onto military bases, colleges and corporate campuses, and big box store parking lots, where trucks can pedal their fare without worrying about traffic laws or provoking entrepreneurs like Keefer.

“Our premise is that the whole country’s got to eat. Under-served areas are a big market and with less conflict,” says Josh Tang, founder of Mobi Munch, which describes itself as “the nation’s first turn-key mobile food service platform.”

Mobi Munch custom builds its trucks for each client at a 100,000 square-foot manufacturing site in southern California that it purchased with some of the $7.6 million in venture capital funds raised last May, says Tang, who’s first big client is Qdoba, the Tex-Mex fast food chain. Tang says the company is also talking to other restaurant chains about how Mobi Much could help them reinvigorate their franchise operations at a time when many would-be franchisees are having trouble obtaining financing for sit-down establishments.

“We are able to provide a mobile franchise for as little as $40,000,” compared to the hundreds of thousands of dollars usually required to launch a restaurant, Tang says. “That way, they (the chains) preserve their franchise business and we are like the landlords,” making money by renting the food trucks and providing other services, he says.

The Food Truck Franchise Group, meanwhile, is focused on the other end of the franchise market: the small business people. The company has developed six different cuisine franchises including Italian and Tex-Mex and Sizzle Stix N’Burger menu options, says Robert Mytelka, a business consultant, who says he decided to get into the food truck business after helping his cousin launch Latin Burger & Taco, a Miami food truck operation. Given the country’s high unemployment, Mytelka says he saw an opportunity to help people who had been laid off as well as soldiers reentering the workforce after serving in Iraq and Afghanistan find opportunities to create their own futures.

“I wanted to see if we could create an easy way for a young entrepreneur to get into the food truck franchise with a minimal investment,” Mytelka says. He launched the business a few months ago and is still in start-up mode. The Group has already obtained operating licenses in about 45 states, hired a sales team, and expects to sell its first franchises within the next three months, he says.

For about $100,000, a franchisee gets a new food truck outfitted to prepare one of the six cuisines plus help with permitting, online worker training, establishing vending locations, and marketing using social media. The company has even developed a mobile app for messaging customers whenever one of its trucks is nearby. People can order online and have the food delivered, Mytelka says.