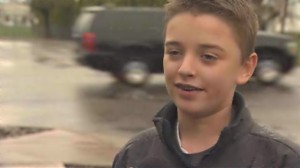 PORTLAND, OR – He owns a business and he doesn’t even have his driver’s license yet.

A Keizer boy was thrilled to get his business cooking in a mobile food cart that he’d saved up to buy.

But it was stolen right after he bought it.

That lesson inspired Epping to make crepes and sell them out of a food cart.

“I’ve always been interested in starting a business and this crepe business sounded like a really good idea,” he said.

Last week, Epping bought a cart off of Craigslist.

He used all his savings.

Jordan had plans to fix it up with corrugated metal, install a sink and sell crepes.

“I’ve actually already registered as the sole proprietor with the IRS,” he said.

His menu cover shows the name of his business: La Crepe Ape.

“I actually had my grandpa lined up to be an investor, for three percent,” he said.

But on Monday, someone stole the cart from a locked storage lot in Salem.

The storage lot was closed that day and they don’t have cameras.

“It would really be nice to get it back because of the time and the money,” said the teen.

Jordan just wants the cart back so he can get his business rolling.

The cart was so new that it wasn’t insured, yet.

His mom filed a police report with Keizer police.

On Friday afternoon, Epping said someone found his cart on the side of Gregg Butler Auto Body Shop in Jefferson and that he’s got it back.

Persistence is the first ingredient to any success.

Find the original article by Erica Heartquist at KGW.com <here>