We would like to thank Joseph & Patricia Meneguzzo of the Rocket Truck in Torrington, Connecticut for giving us permission to re-print this blog post they put together over on their blog.

One reason why the country is in such a pickle . . . 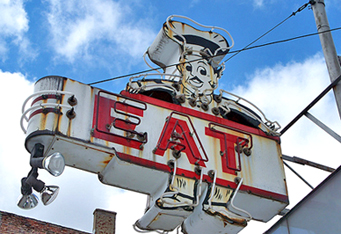 Over the course of the past few weeks the rocket has been exposed to what we call Food Truck Envy. This describes the reaction of some brick and mortar restaurants upon the arrival of a food truck within their market. They instinctively push back by loudly complaining of the “unfair advantages” enjoyed by mobile food operations. At their worst, they successfully lobby local government to ban food trucks or so severely restrict their operation so as to effectively run them out of town.

Now, granted, there are idiots who would think nothing of parking their truck right outside the door of a restaurant. This is a serious violation of Food Trucker Code. A code based primarily upon respect. Respect for the food being prepared aboard their trucks, respect for their customers, respect for competitors and respect for their communities. The rocket would relish the opportunity to lay an offender of this code upon the asphalt and back over their skull, releasing the anchovy sized brain contained therein.

That being said, what a brick and mortar complaining about the food truck parked a quarter mile away is actually saying is that their own food sucks. The restaurant will carry on about all the “unfair advantages” of the truck. “They don’t pay taxes, they don’t pay rent, they don’t have to meet regulations, they can just pull up anywhere”. In one instance, a restaurant owner was overheard saying, “They can’t be here, everyone will want to eat at the truck!” These are the whinings of an ill informed, lazy restaurant operator. Property taxes are paid by the rocket and we must meet the identical health regulations required of a brick and mortar (we received a perfect score on our last inspection). We do pay the loan we had to get in order to purchase the rocket. We do have to pay local permitting fees and event fees, some of which are thousands of dollars at some locations. There is no shortage of hands being extended in efforts to collect money from a food truck. Pay to play as they say. It’s true for everybody. Okay, the mobile aspect is an advantage, but is it our fault that the brick and mortar didn’t have the initiative or balls to launch a mobile food business? The way they make it sound, it’s as if people just stroll by and toss bags of cash in our window and then we greedily drive off to our posh home in Greenwich. If this were truly the case, these complainers must be the dumbest people alive for not abandoning their restaurants for a life on the road in their very own food truck!

Put another way, the restaurant, relieved of having to find a parking space from which to operate, possessing air conditioning and heat, tables and chairs, waitstaff, restrooms, enormous storage capabilities, liquor licenses, and an address, is scared to death of the twenty-two foot long truck parked down the street. Why would someone stand in the rain and then eat in their car or huddled under a nearby shop awning when they could be cozily tucked into a plush booth, watching television, sipping on a beer while awaiting the delivery of their meal directly to the table? The food!

So instead of stepping up and raising their game, the poor brick and mortar cries foul. It is so unfair that some of their patrons have chosen to eat at a truck rather than mindlessly accept the uninspired shit put before them, sometimes with lousy dispositions, at the restaurant. Stifling competition is cowardly. It is Un-American. It is indicative of the country’s current malaise. Quality, integrity, and truthfulness have been abandoned in favor of short term profits. Fight back! Take a stand! Eat well!

Tangentially, some non-restaurant business owners also oppose food trucks. A clear case of not seeing the forest for the trees. Not realizing that people are assembling at the truck just outside their door, peering in their windows, often for the first time, and thinking to themselves, “I never really noticed this store before.” This smells a lot like opportunity to us.

Once again we’d like to thank Joseph & Patricia Meneguzzo for allowing us to share this article with our readers.

If you aren’t already, we suggest you start following the Rocket Truck on Twitter @rockettruck.