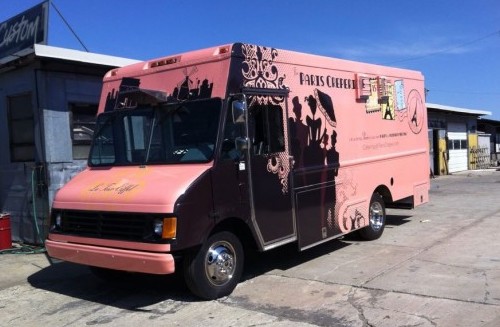 BROOKLINE, MA – The La Tour Eiffel Food Truck is a Boston area food truck which won our Best Food Truck Graphic Design contest last month. The truck is the creation of siblings Nick and Kristen Mallia. Kristen, the self-described  lover of photography and drawing letterforms is passionate about design + typography and is the owner of Mallia Design. She worked with her brother Nick to come up with the design of the truck’s wrap. Nick handles the daily operation of the food business.

La Tour Eiffel, which literally translated means The Eiffel Tower, provides a creative play on words that perfectly captures their truck’s primary concept: “We Bring Paris To You”. Stamps placed on the top right portion of the truck, along with its postage-like logo; help establish the truck as a postcard of sorts. La Tour Eiffel, with its prominent Eiffel Tower sculpture affixed above its windshield exists as a little piece of Paris for their patrons.

They serve an array of creative sweet and savory crepes which average between $5 and $8.  These crepes range from a traditional take on a quiche Lorraine turned into a breakfast crepe, to their spin on French toast. Their menu also hits on more mature recipes like the Rosemary Chicken crepe and their unique La Chocolat, which is Nutella with crispy bacon. Nutella is a mainstay of their dessert crepes. If the crepes weren’t enough, they also serve smoothies from the café, like the Nutella frozen hot chocolate, and Mango Smashin’.

Nick, who described his  food to us as, “unique, out of the ordinary, ethnic blend, delicious”, received his culinary education and learned everything about crepes from his years as a manager at the Paris creperie café in Brookline’s Coolidge Corner.

The reason the brother sister team started the truck was due to the fact they wanted to expand the café but they had issues finding a spot in the Boston area that would provide the same level of foot traffic as Coolidge Corner. “Instead of firmly planting ourselves in the ground, we decided to capitalize on the growing trend of food trucks in the Boston area; if the spot we were using didn’t turn out to be lucrative, we could simply drive away!” they explained.

Once they began the process of creating their mobile business, the design of the truck took approximately one month. They had an incredibly tight deadline, but their vision was clear. Kristen told us that she “had recently redesigned The Paris Creperie logo, creating a refined hand illustrated and distressed postage-like stamp, and this vintage European Airmail language was continued into all branding collateral, from postcard coupons to our La Poste Newsletter”.

Every element of the truck’s design is original, consisting primarily of vector illustration. The patterns are a unique combination of French patterns and Rococo motifs combined with more contemporary graphic design accents, such as the half tone dot. An icon language was developed to distinguish the various menu categories utilizing illustration in the same postal language as the logo. They wanted to create a clear, highly visible language with a Parisian-like café charm that could be seen from a distance, and according to our readers, they hit this concept right out of the park.

When we asked them what advice they have for those that might be thinking about starting their own food truck, they responded, “Communication between printer, truck team and designer. Proper communication between the designer and the printer will ensure that every step of the design, which is the critical face of the business, is executed properly to ensure best results and perfect execution of the vision.”

The biggest obstacle or difficulty that they have found in starting up their truck up to this point is, “Parallel parking a huge food truck in Boston!”

You can follow The La Tour Eiffel Food Truck in Boston & Brookline: