Profiling mobile eateries is becoming a more difficult task for us at Mobile Cuisine Magazine. With every passing day, we receive numerous emails and direct messages on Twitter. These leads and tips give us scoops about new trucks and new cities that food trucks and carts are being allowed to operate in. From Durham, NC to Portland, OR, street food vendors are opening up on a daily basis. The tough part is narrowing down who is to be covered. This is fantastic for us, since if we chose to, we could profile 5-10 trucks a day…every day. 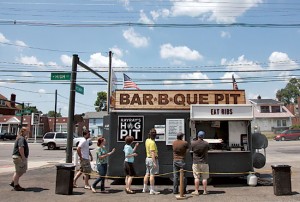 With that said, some towns are getting more mention than others due to their fans, and our readers. One such town that is continually being referred to us is not one that jumps to the top of the list when you think about mobile food, but in our estimation, that is coming to a close very shortly.

Columbus, Ohio, home of “the” Ohio State University, is quickly gaining a name for itself within the industry and it’s community, and we have taken notice.  Although the city doesn’t have specific codes governing food trucks, mobile vendors must still obtain health department approval and a peddler’s license as well as licenses for any additional employees they may have. The Columbus traffic code states that a vehicle selling goods cannot park on the street for more than 15 minutes, thus trucks must operate on private property; pushcarts have to work by a curb and leave at least 5 feet of pedestrian sidewalk space between the cart and the adjacent building. “It’s a safety issue,” said Sharon Gadd, the city’s licensing manager.

To research for today’s profile we were able to get a list of mobile vendors from the Columbus Underground Discussion Forum. At the top of their list sat our choice for a vendor profile.

Last year, James (Jamie) Anderson sent out an email to his restaurant (Smackies BBQ) followers, which included this snippet, “I have opened three restaurants and I have closed them all. I couldn’t seem to get my blood pressure down and closing the restaurant I think has finally got me nice and calm and I think my blood pressure is right where it needs to be.

The restaurant biz will make an old man out of a young man really fast. So I have went back to my roots. ONE MAN – ONE SMOKER. I have no restaurant and no staff to babysit. Just me and my Pit, back to the basics.” And so was born Ray Ray’s Hog Pit.

The smoke coming from the corner of Pacemont and High Street, is not what you may think it is, rather, it is the smoke generated from the barbeque pit of Ray Ray’s. The pit is situated in a barbecue cart where, on a blustery day, the aroma of hickory smoked brisket carries for blocks. The cart is only open Thursday through Sunday but on those days, there is always a line. According to his fans, that is because nobody in town makes better ribs than this Pit Boss.

Ray Ray’s orders their beef from a certified organic farmer raising Heritage cattle in Oklahoma, and smokes it with only a light seasoning of salt and pepper. Once the meat comes out of the smoker, it is rubbed with Ray Ray’s special seasoning (paprika, onion powder, and sugar) and doused with his homemade Dogfish Head Ale Barbecue Sauce, a  tangy South Carolina style sauce and is finally grilled. The menu consists of 3 meat options; ribs, brisket and pulled pork. If you make your way to this food cart on Sunday you will have the additional option of a lean grass fed beef brisket. Once you have made your selection, you have the option of three sauces, mild, hot and habanero.

The tasty side dish options are Southern style collard greens, macaroni and cheese, baked beans and coleslaw. Any of these sides will help to compliment to main course. Should you have room after your meal, there is a desert offering which normally consists of banana pudding and fruit cobbler which are all made by Jamie’s wife.

Our suggestion is if you want to be sure to get your order filled, get there early, Ray Ray’s opens at noon but, according to Jamie, he almost always sells out of his daily 100 pound grass fed allotment long before his normally scheduled closing time of 8 p.m. The cart has no website, no tables and a posted warning about their inventory: When it’s out, it’s out. But one of his followers on Yelp may have said it best, “Ray Rays what can I say, you’re my BBQ crack heaven…”