Soon after Mobile Cuisine Magazine began covering the Meatless Monday movement we began receiving email requests to provide our readers a list of food trucks that carry a vegetarian or vegan menu. We answered these requests by providing a list of these trucks, but only gave short descriptions of each. We have added to the list since that time, but have also made the commitment to provide our readers with more in-depth profiles of these vegetarian mobile food vendors. Today we will spotlight a hot dog vendor in Southern California that will help those of you who have joined the Meatless Monday movement, but also might have a craving for a hot dog. 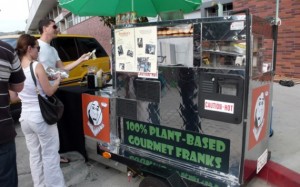 Throughout the country, street food has become more than just a new culinary trend. Alongside the spreading popularity of gourmet food trucks nationally, urban street cart vendors are finally getting the recognition they deserve. Anthony Bourdain of book and “No Reservations” fame, often sings the praises of freshly prepared street cuisine. Television chef Susan Finegar’s Los Angeles restaurant “Street” offers a menu of flavorful dishes inspired by savory stews, curries and other street food around the world.

Because of the expansion of their popularity, you can now find food carts in almost every Los Angeles neighborhood. However finding a cart or stand that has vegan or vegetarian options can be difficult.  With that said, we have found one to profile. It is a hot dog stand which has a 100% spooky-themed vegan menu.

Before opening the stand the owner Raymund and his band were playing venues throughout Los Angeles. Being a vegan himself he had always found it difficult to find food to eat after his late night shows. With this issue at hand in addition to the fact he had always wanted to own his own diner, he took a bold step forward. He sold everything that he owned (car, music equipment, etc…) and used this money to have his mobile hotdog stand custom built to his specifications.

Once completed, he made his way onto the streets of L.A. He started out by working events in the alley of, “The Smell” in downtown Los Angeles and since then has expanded his reach throughout the city.

Some may wonder, why the monster theme? That was easy for Ray to answer. As far back as he could remember he had a love of monsters. At the age of two, he is told he would watch the movie Dark Crystal every day. His first real experience with “horror” was watching the Invisible Man with Claude Rains, and when visiting the Universal Film Studio he immediately fell in love with Frankenstein the monster. By the time he reached his teenage years he had a vast knowledge of all things horror and began following B side horror films. “I wanted Franken’s to be fun, unique and reflect who I am. People respond really well to our style plus get to do what I love.”

The Frankenstand menu is simple, but according to their fans, “absolutely fantastic hot dogs.” They offer 3 options of completely vegan gourmet franks (plant based; no meat, no dairy, no eggs).

Customers receive their franks plain and in a bun, but at no extra charge, have all of these condiments available to dress up their dogs (pickles, onions, sauerkraut, relish, jalapenos, fresh chopped cilantro, ketchup, mustard, bbq sauce, hot sauce & vegenaise).

According to Raymund, “Franken’s is not a part of that (food truck) scene. We are doing our own thing our own way. We do events that food trucks have no idea about. We don’t care about the crowds, we care about the people.” Franken’s books events throughout Southern California including private parties, festivals, music shows, art shows, independent theatres, & museums. “Since we are so compact it makes it a lot easier to be “a part” of the happenings and just be parked around it. That is our goal. We are there because people want us there.”

Please do your part today and join the movement? Signing up is fast and easy! Follow them on Twittter.