With Oprah Winfrey taping her last show yesterday we felt that profiling a Chicago based food truck was an ideal homage to her.

As we all know, cake can be cumbersome, but cupcakes are compact confectionary treats, and the perfect baked good for a mobile diner. The Flirty Cupcake truck is a mobile mini bakery, which roams the city streets with the goal of satisfying the sweet tooth of many a busy Chicagoan.

The chefs at Flirty Cupcakes begin preparing the desserts at 3 a.m. They offer seven different types of cupcakes daily, including the “Chocolate Best Friend Forever” and the “Curious George,” two favorites among consumers. Red velvet cupcakes also sell out consistently, under the nickname “Devil in Disguise.” Their cupcakes are made daily at Kitchen Chicago, a commercially licensed, shared-use kitchen in town. 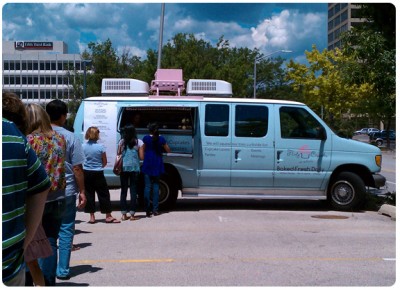 Flirty also holds weekly specials, rotating their themes such as their Mother’s Day cupcake, a white chocolate cupcake covered in blackberry frosting, amongst their usual offerings. The cupcakes are loaded up in the morning, and driven all over the city to anxious fans awaiting their arrival. Flirty’s dusty blue van is a beacon of tasty baked goods in the Chicagoland area, so easily recognizable that its drivers have dubbed it “Big Blue”.

In addition to being prepared beforehand, the current city regulations mandate that their cupcakes must be pre-packaged. This has opened a window of opportunity for Tiffany Kurtz, owner and founder of the Flirty Cupcakes, (co-owned with husband, Chris Sewell). Kurtz, who has an extensive background in marketing, uses what she calls her packaging “gift boxes” to add to the personal, nostalgic appeal of Flirty Cupcakes.

Her customers are loyal social media followers. Flirty Cupcakes depends almost entirely on social media to fuel its mobile business. The employees tweet the daily schedule as well as listen to feedback and requests from customers.

“The followers do most of the work for us”, laughed Kurtz, “They tell us where they are, and request us to go places.”

The “Curious George”. This banana chocolate cupcake is moist with just the right amount of banana and the frosting is well, to say the least, fantastic.

Oh my.  First off, they will always have my respect because they drove south.  Like REALLY south.  Like the Tinley Park Metra station south.  I actually had to decide between going to church to get our Easter baskets blessed and meeting Flirty Cupcakes.

I am so so so impressed.  These are the BEST cupcakes I’ve ever tried, and I’ve tried quite a few.  Fresh, moist, the toppings are incredible and the fillings out of this world.  WELL worth the price.