Rumors have been circulating for the past few months about the possibility of the owners of Fojol Bros. of Merilindia, an Indian style food truck in Washington DC, opening up a new truck in our nation’s capital. These rumors were speculating that the new truck would be serving up a different style of food to the area. As we have recently found out, the rumors were true, and their latest food truck was unveiled last weekend and its name is Fojol Bros. of Benethiopia. 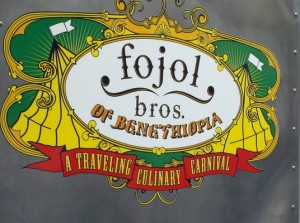 If you hadn’t guessed, this truck will be serving up Ethiopian selections and Wednesday marked its first official day. This is the first Ethiopian food truck to roll onto Washington DC streets, but based on the initial reviews of the truck’s fare, it won’t be the last. Managing this new truck is Russell Bailey, a high school friend of Fojol creator Justin Vitarello. Bailey and his wife, Lula Habte, are providing their culinary skills in the mobile kitchen. Both come from culinary backgrounds. His family operated a restaurant and deli in Leesburg, VA, and Habte’s mother owned restaurants in her native Ethiopia. In fact, Habte’s mother’s berbere blend is used in some of the truck’s dishes.

At first glance, the only difference between the trucks is their color scheme (the Benethiopian truck shares a color theme similar to the Ethiopian flag), however once you walk up to the new truck, you are going to see a large sink that is available to its customers. The sink provides hot water, soap and paper towels. If you are not familiar with Ethiopian food, you may wonder why a sink, however if you do know about the use of injera (a spongy, pancake style bread used as utensils) the sink makes perfect sense.

The menu offers 5 items, with 3 different size options. You are able to mix and match any way your taste sees fit. As of this report, there is only one meat option; however, once the chefs find a breed of chicken that meets their requirements, the truck will begin to offer a traditional doro wat. All of the items are served with a heaping portion of injera bread to use instead of utensils, even though forks are offered for those not interested in eating with their hands. 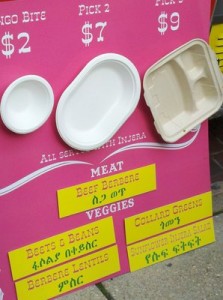 Berbere Lentils: Lentils served with the same spices as the beef.

Collard Greens: Not to worry vegetarians, this selection is not made with pork, but does have a mix of tomatoes and onions.

The concept of this vehicle is fantastic and should widen the cultural perspective of many of DC’s population by introducing them to mobile Ethiopian cuisine. Food truck owners across the nation have the ability to share international food styles with a population that is more accustomed to grabbing a 6” turkey sandwich from Subway or a BigMac and large fries from McDonalds. With the Benethiopian Truck, the Fojol Bros. have done it again and we wish them continued success.