As a regional franchisee for Gandolfo’s Deli Sandwiches, Randy Wolken has been working hard to get his first food truck on the road in Dallas, Texas.  After almost 2 two years combined into planning and execution, his dream to bring the taste of New York around the country has finally become a reality.

Last month, he drove the new truck on a long trek from Florida to Texas. The truck was purchased from Miami Trailers, whom Randy explained, “did a fantastic job”. He is now permitted and has his parking destinations lined up.  Although he wanted to be on open for business on Tuesday, an electrical problem in the commissary caused a delay which set his opening back by a day. 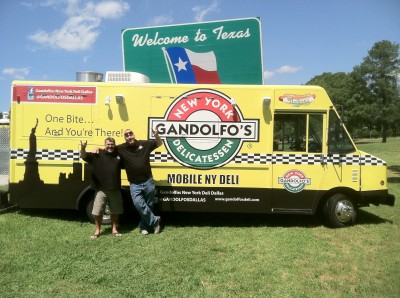 Crossing back in to Texas on our road trip from Miami. Owner/master franchisee Randy Wolken (left) and GNYD CEO Dan Pool (right).

He started his culinary experience when he started bussing tables at 15 in a coffee shop, he also worked at McDonalds, Pelican’s Wharf and then moved on to management with several restaurants. He owned a catering service and was a multi-unit director with Steak and Ale, and after 15 years he moved into financial services industry.

Randy retired as a financial advisor and returned to the restaurant industry as a Master Franchisee for Gandolfo’s New York Deli. At this point in his career, he is most proud of this difficult decision.

He is a self-described, fearless individual who is addicted to adrenaline and optimistic almost to a fault.  He found a passion within for the food truck experience and from a business perspective decided that is was a great way to market the brand in a new market, higher net revenues than a brick and mortar and a source of real data for site discovery.

He will have multiple trucks, each nicknamed after the boroughs of NYC to help keep track of them.

The trucks will be serving New York Deli sandwiches, fresh made salads and desserts; with the average ticket price is in the $9-$10 range. They also plan to use the truck to test market more traditional deli cuisine to introduce to the deli brick and mortars.

In regards to opening the truck, he discovered early on that, “navigating the various rules and regulations, primarily differences among municipal health departments” would be his biggest obstacle up to this point.

When asked, what advice he had for those that might be thinking about starting their own food truck, he responded, “Understand that just because it is a truck does not mean it is cheap or easy. Doing it right means having to rewrite the rules and think outside of the box always. When was the last time you checked the oil on your brick and mortar before you opened. I have been under the chassis on my truck changing oxygen sensors before I could get the truck inspected. Having detailed checklists for operating the truck are almost as important as the checklist for operating a plane. Small things overlooked have the potential to have large consequences.”

We would like to thank Randy for the time he gave us, and wish him much success deep in the heart of Texas, or any other location he opens a truck.

The Gandolfo’s New York Deli food truck can be found throughout the city of Dallas, TX.