Yet another metropolitan area has entered into the world of mobile cuisine. With its rich automotive history, it should be no surprise that Detroit and its suburbs have permitted what is thought to be its first food truck to open its doors for business.  Jacques’ Tacos is the latest spin off from the wildly popular Los Angeles’ food truck industry. Detroit area native and single Michelin star rated, Wesley Holton, was the executive chef of Daniel Boulud Brasserie in Las Vegas before it closed last year. With the idea to move back to his roots, Chef Wes moved back to the Detroit area with dreams of opening his own restaurant. With Jacques’ Tacos, he has already achieved his goal. 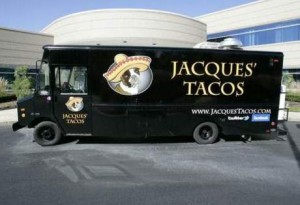 Holton has found what other food truck owners have learned on their own, getting all of the approvals, passing numerous inspections and finally getting all of the required permitting is no easy task. According to Holton, “If I had known what I know now, my life would have been a lot easier.”

With a menu that offers up a variety of taco delights, all of the chef’s tacos come with a warm corn tortilla, fresh black beans, corn salsa queso fresco and salad vert. It is up to the customer to select their protein from braised beef short ribs (The D-Town), grilled chicken, or slow roasted pork. These heavenly tacos will cost you the mere sum of $2.50, so feel free to try them all out until you have found a favorite.

As one customer put it, “Jacques’ is what would happen if the Taco Trucks of Southwest Detroit grew up…”

Right now Chef Wes is making regular stops in Royal Oak, Farmington Hills and Canton with plans to add more locations and trucks in the future.