Food Truck Profile: Off The Grill

Before you dive into your veggies, get to know the winner of Mobile Cuisine’s 2014 Food Truck BBQ Of The Year Off The Grill of El Paso, Texas!

This young entrepreneur is taking El Paso by storm.  Adrian Padilla’s passion is fueling his every move.  I asked why start this business while you’re still in high school.  This young man of faith answered, “Once God put this plan in my heart, it just didn’t make sense to wait.” 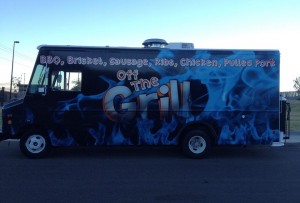 “The business itself was inspired by a vision my Grandpa kind of planted,” he explained.  Adrian’s close relationship with his Grandfather taught him a lot about business, who had run his own business successfully for 30 years.  His Grandfather saw the spark in Adrian and encouraged him to start out on his own.  When his Grandfather passed away, Adrian shared his plans with his family and supported him without hesitation.  It was a way to honor his Grandfather and continue his legacy.

Every entrepreneur has that spark, but why grilling?  Adrian said he had fun experimenting with rubs, spices and online recipes on his favorite food – MEAT.  For a city known for “insanely good” Mexican food, he wanted to “do something (else) Texas is known for and felt there was a need for more BBQ.”

Off The Grill was conceived as a prelude to a restaurant, and of course, his love for grilling.  Adrian wanted the name to translate well from a truck to a brick’n mortar.  The name got family approval.  Once he had the name, he partnered with Rigo’s graphics to fulfill his vision giving El Paso something that hadn’t seen before.

Adrian’s favorite part of running the truck is having a close relationship with his customers.  He loves meeting new people, getting out and shaking hands (when time allows), sharing food and telling his customers “Have a great day and maintain!”  After a local media outlet profiled him, an unfamiliar woman contacted him.  She and her family were long-time neighbors of his Grandfather.  They came to the truck, enjoyed some food and stuck around to share priceless stories of his Grandparents.  It’s that interaction that keeps him excited and driven.

With all of his success, the lines might be long at the truck.  His favorite dish is the BBQ Taco, infusing his culture into this pulled pork, pico de gallo salsa and a little bit of lime creation.  Oddly, this best seller wasn’t even on his original menu. 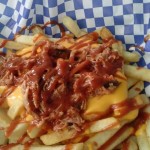 We asked him where he sees himself in the future.  Joking around he replied, “Ellen!  Ellen!  Ellen!!”  Realistically, he wants to open a brick’n mortar restaurant, but his immediate plans are to “help the food truck industry here in El Paso.  There are so many wonderful, delicious trucks our here.  I’d really like to change that ‘lunch truck’ stigma that most are familiar with.”  With Off The Grill on the streets delivering mouth-watering dishes, we are confident that change will happen.

In his spare time, which we imagine is quite scarce, Adrian likes to DJ.  He loves all genres of music and has been known to bring his DJ equipment along and add to your food trucking experience.  We like the idea of hitting all of your senses with Off The Grill flavor!

Off The Grill was created in the hopes of building on his Grandpa’s family legacy.  “I wanted to be a blessing to my family just as he was to his,” stated Adrian.  We can feel the passion in every move of this young man.  His faith, family and the memory of his Grandfather inspire all that he does.

On his first day at a Food Truck Circus event Adrian exclaimed to his mother, “This is going to be awesome!”  In the short time Off The Grill has been on the road, it certainly has been awesome!  Congratulations on winning!  We’ll be waiting in lines for those awesome pork tacos too!