The husband and wife team, Christopher and Valerie Taylor, are proud owners of the Roaming Buffalo food truck.  Originally started as a place for wings and weck, it’s evolved to creating some of the most interesting sounding and surprisingly delicious tasting burgers in town.  Surprisingly?  Most definitely.  In a good way, of course!

The burger in question:  The WTF!?!? Burger.  It’s a ¼ lb. burger with house-made bacon jam and peanut butter – crunchy or creamy.  That last condiment usually elicits the WTF!?!? response.  We’re not surprised. 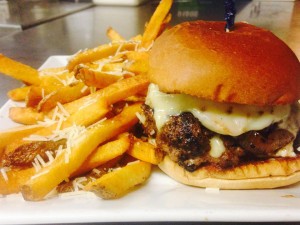 “We love the faces people make when they see it on our menu, but quickly reassure them if they don’t like it we well give them their money back,” says Christopher.  In the four years they’ve been serving the WTF!?!? Burger, they’ve only made one refund.  Why name it WTF?  It came from “our customers biting into the burger and uttering those three little words and with that the infamous WTF Burger was born.”

Roaming Buffalo burgers are not your run-of-the-mill burger.  They have a special blend of ground beef – a secret blend of meats that stand out from your traditional burgers (no, we didn’t get any trade secrets).  They also offer grass fed beef or bison meat for all of their burger creations to accommodate customer preferences.  They use a local bakery, Costanzos Bakery, for their brioche rolls.

With a solid foundation, Roaming Buffalo is always trying new burger concoctions.  The latest addition to their menu is their take on a Juicy Lucy, called the OD of Cheese.  The Juicy Lucy is a burger with the cheese stuffed inside the burger patty and when grilled it becomes a molten core of hot, oozing, creamy deliciousness.  It originated in Minneapolis and is part of their local lore.  Roaming Buffalo’s OD of Cheese consists of their secret burger mix stuffed with American cheese, topped with more cheese and their house-cured bacon.

Why do this?  “There is nothing better to me than being able to provide for my family while doing something I love,” says Christopher.  While not formally trained, Christopher found his love of cooking from his mother and grandmother.

Their families and friends have been very supportive throughout the whole process – from getting started to daily operations.  A loan from an uncle for the truck and his father that picked up the product got them on their way.  In addition to the love of cooking passed down from his mother, she’s been instrumental in their success watching the Taylors’ two young boys.  “My wife and I are so truly grateful for each and every one of them,” Christopher said thankfully.  “A lot of our customers and vendors have become like family to us and I know they have our backs 100%.”

All this support has allowed Roaming Buffalo to become one of the top food trucks in Western New York.  This community of support was evident during the voting process.  All of the Buffalo food trucks supported their nomination through social media.  “We are like a big family and have been through a lot – including getting some of the best food truck legislation in the country,” said Christopher.

“Buffalo is full of great culinary talent,” he boasts.  He comments that most of them are his fellow food truckers.  They come up with amazing creations “that I feed off of.”  They get together after big events and discuss how things can be done better.  They’re not seen as competition, but as inspiration.

When operating in such a positive environment – where the local laws are great for business and the food truck community is inspiring – it’s hard not to give back.  Roaming Buffalo is involved with many community charities, such as, Jim Kelly’s Hunter’s Hope Foundation, Food Bank of WNY, Roswell Park, American Cancer Society, UNYTS, Animal Shelter of Buffalo, Buffalo City Mission Buffalo Meals On Wheels and the B Team of Buffalo.  “With the help of our customers, we have raised over $5,000 in the four years of business.”

Being in business for four years, they’ve had some standout moments.  They’ve won multiple awards for their burgers – even beating out a local brick’n mortar for best burger in Buffalo – including Bufflalo Spree 2013, Yelp of Buffalo 2014 and the Hamburg Burger Festival 2012, 2013 and 2014.

They’re doing something right.  All of that recognition for the ever-present hamburger is truly incredible.  Roaming Buffalo seems to have the winning combination of food and attitude.  We’re happy for their success and can’t wait to see them grow…  I don’t know when I’ll make it to Western New York, but I’m dying to try the WTF!?!? Burger!

Congratulations to Roaming Buffalo for winning Mobile Cuisine’s 2015 Food Truck Burger of the Year!  Keep up the WTF!!