Over two years ago Sean Priester’s official launch of the Soul Patrol food truck took place. Since then the truck has been gathering steam in Honolulu. Formerly the executive chef at Top of Waikiki, the chef shares his interpretation of soul food inspired/Pacific Rim influenced food. 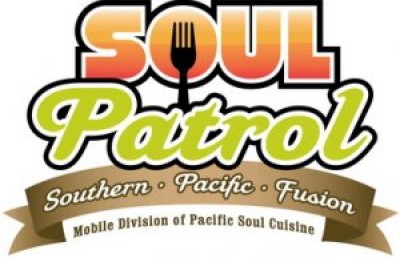 Many were surprised when the chef left his long-standing, position at The Top of Waikiki to roll out the Soul Patrol. There was more to it than Southern soul food; Soul Patrol started as a mission to help nurture and feed hungry and homeless souls in Waianae a few days a week, and soon afterward, took on a life of its own, and now provides what may arguably be the best Soul Food you can find in the middle of the Pacific Ocean.

Creativity is the name of the game when it comes to launching a new business in this industry. Sean’s committed to making his operation as simple and nimble as possible, while serving up gourmet eats for the complex palate.

Chef Priester’s soul is in the food, while the “patrol” is his food truck. He explains his menu this way, “Like many locals who were born and raised in Hawaii, I have little to ZERO exposure to TRUE good ole’ southern cooking, save for some recipes we use here that are clear adaptations from the region. My late (English-Hawaiian) grandmother for one made this amazing fried chicken with white gravy that surely has roots from the south. But that’s as far as I’ll even try to go in describing the cuisine, lest someone hurl a full pan of cornbread ‘n grits at me. “

Of course there’s much more to Soul Food than fried chicken. Eating The Soul Patrol’s “Southern Sampler Plate” is similar to eating a Hawaiian Luau plate. You know everything magically ties together when you have your laulau, kalua pig, chicken long rice, poke, sweet onion and poi all together on one dish. The very same thing happens here. The buttermilk fried chicken, collard greens, honey-cilantro coleslaw and “sweetcorn” cornbread is very similar dining experience.

Adding to the urban ambiance at the Soul Patrol you are be greeted by R&B and other related hits played through a boom box pointing out the food truck’s front door.

The music and food go hand-in-hand, and it can be appreciated when eateries use music to enhance and immerse their customers in the style of cuisine they’re serving. Even if it is from a place as casual as a mobile eatery, having both the music and the food be “served” together makes it that much more an “experience” than just a necessity of the day. Now that is what you can call soul.

Add to that the rarity of good ‘ole Southern Soul Cookin’ on Oahu, your experience will be good for the soul.

Although recently rumored that Soul Patrol would never hit the streets again, due to the fact the chef had a fixed location for his restaurant, the truck has been spotted at local food truck gatherings.

The Soul Patrol truck still makes the occasional guest appearance at community events (for locations, follow @pacificsoul on Twitter.com), but with a busy home life and his brick and mortar Soul restaurant, Priester has a lot to juggle.

The Buttermilk Fried Chicken. Although it is not cooked to order, they are still super moist and tender.

Chef Sean is a magician. He truly puts his soul in his food and as soon as you try his food, you will become a loyal follower. It is insane how good the food is and makes me weak in the knees when I have a bite. If there is EVER a reason to have your cholesterol go up, add a few pounds, or a reason to run 10 miles for a single meal, dining at Soul is that reason.