Although Chicago’s food truck ordinance is sitting in committee awaiting approval from the Chicago City Council, a vegan food truck has still found a way to share their vegan cuisine with the residents of the city.

A partnership between Soul Vegetarian, which is Chicago’s oldest vegan restaurant and the owners of Ste Martaen, a family owned, vegan cheese producer have collaborated to bring the people of Chicago it’s very own vegan food truck. The truck serves up 100 percent meat-free fare (Asian burritos, chicken BBQ wraps) every evening Tuesday through Friday and all day Saturday. 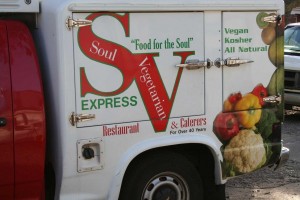 Ste Martaen Vegan Cheese co-owner, Nahum St Martin had worked for and with Soul Vegetarian for over 14 years. He was aware that the restaurant had a truck roaming the streets of the Windy City for nearly 4 years, but in following the recent trend of the food truck industry’s growth, had the brilliant idea that it was time for the existing truck to expand their operations.

Although the new and improved truck has only been on the streets since last month, the response of Chicago foodies has even surprised the owners. According to St. Martin, “Chicago loves their food and the vegan community is ultra-supportive of positive, healthful new ventures. We are so grateful.”

The rotating menu is not set in stone yet as they are continually testing new entrees. “Chicago will ultimately decide if they’re good or not. If they don’t sell, we know they didn’t pass the test.” St. Martin added, “We

[have been] concentrat[ing] on a couple of sandwiches, a daily Soul Veg meal and Soul Veg side dishes. Also, my wife will be providing desserts like a Chocolate silk pie and pecan pie, all vegan, of course.”

When asked if creating healthy products was important to him, this New Jersey transplant responded this way, “We didn’t set out to be soy- and gluten-free. But a healthy product was key to us. As a parent to five children, I will not serve to the public anything I won’t feed my family. My oldest daughter is 16, and she’s been vegan her entire life, as have our other four children. Promoting healthful lifestyles through veganism is our main objective.”

One of the truck’s new customers explained an easy four step process that they have found worked for them in dining from the Soul Vegetarian/Ste Martaen food truck:

With directions like that, anyone in the area should be able to sample the menu within a few weeks. Whether it’s the BBQ mock meat sub, chick’n tacos, pepper steak sandwich, and a lunch platter with chick’n parmesan, greens, mac n cheese and carrots. Everything can be found between $6 and $10 with portion sizes any hungry foodie will find large enough.  If a simple vegan meal isn’t enough, to finish off your meal, this food truck also carries a number of vegan deserts.

The truck roams the city and focuses on university areas including: University of Chicago, Northwestern, Loyola, Columbia College, De Paul and UIC, but will stray off course if asked by their followers.

You can follow them on Twitter and also at their website.
Please do your part today and join the Meatless Monday movement.  Signing up is fast and easy!