While not the mobile food capitol of the country, Salt Lake City has begun its own plunge into the world of mobile dining with a bright yellow truck serving haute Asian cuisine from a rolling bistro named The Chow Truck. 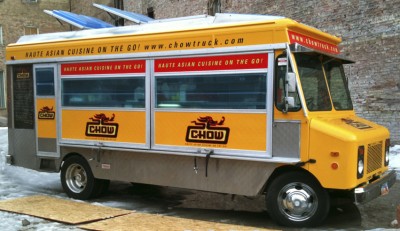 SuAn Chow, the owner of The Chow Truck is no stranger to Salt Lake City or its diners. She is the founder of Charlie Chow’s Salt Lake City restaurant. According to their web site, “She sold Chow and ChowMeina in the early 1990s and moved to New York where she furthered her mastery of style as Creative Services director at Joseph Abboud designer men’s wear. Post-Abboud, forays into commercial real estate and success as a product designer as well as liaison between Chinese and American businesses and government entities established Chow as a serial and fearless entrepreneur.”

Chow has taken a mobile concept onto the streets of Salt Lake City, or in simple terms, taco truck meets gourmet Asian cuisine.

For many of us, “on-the-go” isn’t just a lifestyle, it also refers to our way of consuming food. With fast food and 30-minute meals, whether it’s cooking or eating, we err on the side of quick. At Chow, the food is fast, and bold in flavor.

The Chow Truck menu is straightforward. They serve up five main dishes. Coconut lemon grass chicken, Pineapple ginger pork, Spicy beef with Cilantro Chile-Pesto and Panko fried tofu with Cilantro-Chile pesto. The next step is to have those flavors placed into your choice of either a taco or on a slider, at this point your creation is topped with Asian slaw and crunchy sliced wonton. The slaw serves a useful purpose in its vinegary bite and fresh crunch

These main selections are bolstered by a smattering of other items such as deep fried calamari, soups, and root vegetable chips. The chips are a mix of fried Yukon and purple potatoes, carrots, yams, beets and lotus root. The root chips provide a nice alternative to plain potato or tortilla chips.

The Calamari is tender, perfectly fried and shares its container with fried parsley leaves and thinly sliced lemon that was also battered and fried.

Due to strict city restrictions, the truck may only park on private property.

Check out The Chow Truck website or follow them on Twitter for daily locations and special menu items. There hours vary, but they are generally Monday through Saturday for lunch and dinner.

The spicy beef taco. The flavors are spot on. Not only does it have a suitably spicy kick, but they provide a good texture with the crunchy wonton topping and cilantro adds a nice crunch and freshness. We typically suggest a taco preparation over a slider as the taco is far easier to manipulate on the go.

Salt Lake City has a new culinary gem, and it’s on wheels!  Judging by who is cooking the food, Roseanne Ruiz, I knew the food would be good, but it exceeded my lofty expectations.  The calamari is dusted with chili powder and fried with lemon slices, then served with a wonderful aioli.  The best calamari I’ve had (and it’s served from a truck!).