For our first Meatless Monday back online after a long layoff, we will provide a food truck profile of one of the nation’s most know vegan food truck.

Soon after we began covering Meatless Mondays on MCM we consistently received messages to provide a list of food trucks that carry a vegetarian or vegan menu. We did this by providing a list of these trucks, but only gave short descriptions of each. We have added to the list since that time, but have also made the commitment to provide our readers with more in-depth profiles of these vegetarian or vegan food trucks.

On this President’s Day, Mobile Cuisine Magazine will take a closer look at a food truck that has a home base just 30 minutes outside of the hometown of our 22nd and 24th President of the United States, Stephen Grover Cleveland. The Cinnamon Snail calls Hoboken, NJ home and is run by self-taught chef Adam Sobel. 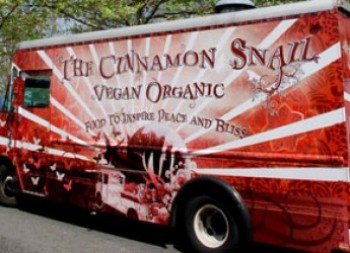 The Cinnamon Snail has been a dream of Sobel’s for years, but is not sure what sparked the initial concept. In his youth he was a self-described “little punk graffiti artist”, who always liked the idea of forcing creativity and beauty back into the community, to the street, where everyone comes in contact with it.

Sobel a vegan for nearly a decade owns what is considered to be the nation’s first organic vegan food truck which opened last February on Valentine’s Day. During this time Chef Sobel has been spreading his passion for veganism to vegans and non-vegans in the Hoboken area.

Since he started preparing vegan food professionally, there have been few things that get him as excited as hearing how something vegan has helped someone change their eating lifestyle. As he has explained, “The thing about most vegetarian restaurants is that largely, you are “preaching to the choir”. Most customers are already vegan, or at least conscious about the suffering of animals in food production. With the truck, I deal with the full spectrum of people. Most of my customers are not (yet) vegan. They come to my truck and see awesome looking donuts and pastries, and they fall in love with the sweet, donut-y circles of heaven. After a couple of weeks they are eating Creole Grilled Tofu sandwiches, or enjoying clean raw food for lunch.”

The truck’s menu is seasonal, and is something that will evolve the longer they are open. The truck serves pastries and sandwiches and is open Thursday thru Sunday. Sobel stated that they primarily serve breakfast and lunch but on rare occasions will stay open for dinner.

Sample items from the menu:

The menu item the chef is most proud of is his Ginger Island Grilled Tofu over Coconut Mashed Yams and Greens, with Grilled Mango Salsa, Spiced Candied Pecans, and Fried Ginger.

Another menu item that is constantly mentioned in customer tweets or Yelp reviews are his vegan donuts. He worked on them for years, but is always modifying the recipe in a pursuit of perfecting this creation. They make traditional donuts such as apple cider, and strawberry glazed (made with fresh strawberries in the glaze) but also sell more decadent choices such as peanut butter chocolate cheesecake donuts, and chocolate cookie glazed.

While researching for this profile we stumbled across an interview where Chef Sobel was asked, “What is the best advice you’ve ever been given?” His answer?

When you have some negative perception of someone you do not know, confront them and make sure you communicate that you love them and just want peace between you.

When I first got the truck running, the Hoboken Police chased me from time to time. Hoboken has some annoying parking laws that make it tough for food trucks, and when the police choose to enforce the parking laws, it makes operating very difficult.

One slow Sunday morning, a Policeman came and made me move my truck. Within five minutes of finding a new spot, he was back and already getting irritated. He gave me a ticket and told me that I had better pack up for the day. It was a bummer but I started packing up. Packing up a commercial kitchen on wheels takes time, and he was back within ten minutes, really mad now that I wasn’t gone yet. The officer gave me two more tickets and followed me out of town. I didn’t leave town immediately though. Instead, I boxed up all of my pastries and went to the police precinct and gave them to the police to enjoy; I make a regular habit out of doing this.

A couple of days went by, and I had been left with such a bad taste in my mouth about this police officer. Thinking of the advice I had been given, I decided to go to the police station to talk to him. I let the officer know that I was sorry if it seemed like I was giving him a hard time the other day. I was super friendly, and immediately I could feel the tension clear. He told me how bad he felt when he came back to the station and was enjoying the donuts I had given them.

Now that officer eats lunch at my truck often. He brings new policemen with him all the time, and I know that slowly, he is getting turned on to vegan food!

If the Cinnamon Snail’s popularity can be shown by the number of individual entries for Phase 1 or our upcoming Best Food Truck in the Country contest, it looks as though all of New Jersey is lending Chef Sobel a huge hand.

If you own or know of a truck you would like to see profiled for our weekly Meatless Monday coverage, please let us know and we’ll be sure to add them to our ever growing list, and in doing so others will learn about them and can follow those in their area.