So there I was; walking the streets of Chicago with my wife after spending time at the County building doing some work on the business side of the magazine. It was cold and we were tired. My coffee cup had just run dry, and we had a 4:02 train to catch to make our way out of the city. Moments after jumping in a cab, my wife yelled to the cabbie, “STOP!!! We’re getting out!” We had travelled maybe half a block, and I was wondering what she had seen, or what had caused her to want to get out of the cab so quickly. As we made our way out of the cab, I saw it, in all its glory. The More Mobile, a state-of-the-art, environmentally friendly customized Mercedes-Benz Sprinter van, and it was parked on the side of the street, selling its confectionary goodies to the general public. 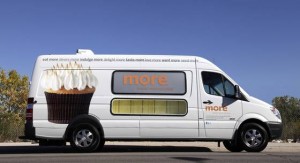 The More Mobile is Chicago’s latest addition to the cities growing number of food trucks. After experiencing a few hiccups in the design build process they first hit the Chicago streets in October. The truck specializes in cupcakes which it makes from its storefront location at 1 East Delaware Place on the Gold Coast of Chicago. The design of the truck has a clean modern look, and includes an illuminated display window just under the customer service access that mimics “The Great Wall of Cupcakes” from the store. The truck was designed by the same architect (David Woodhouse Architects, LLC) who designed their permanent location, which received an AIA design for excellence award.

The truck operates the same hours (Monday – Friday 8am – 9pm, Saturday 9am – 9pm, Sunday 10am – 6pm) and sells a similar variety of cupcakes as the store does (although the truck sells 13 flavors, the store at times has had 32). When they hit the streets, they have 11 standard flavors, Red Velvet (their best-selling), Salted Caramel, Valhorna, Cookies and Cream, and their signature More Cupcake, and 2 additional flavors that rotate daily. The price for each of these scrumptious delicacies is $3.50, which in our opinion is a steal for the quality of the product and the size of each portion. 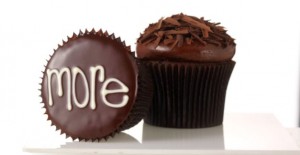 Since they operate in the bustling city of Chicago, it only makes sense that on Fridays, the store and truck have a Happy Hour celebration. Today the truck has been offering White Russian inspired cupcakes that are garnished with tapioca “Caviar”. Due to the demand of all of these chef driven cupcakes, there are plans for a second truck in the future.

It seems like people have been predicting the end of the cupcake trend every year since it started a decade ago. “I think we can say if it’s been more than ten years, cupcakes are here to stay,” owner Patty Rothman says. After sampling their salted caramel and chocolate peppermint cupcakes, Mobile Cuisine Magazine whole heartedly agrees.