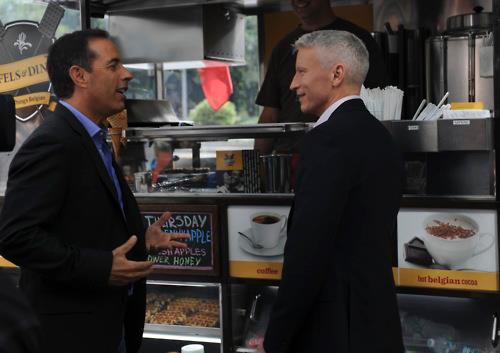 Cooper and Seinfeld go to the Waffels & Dinges food truck near Cooper’s studio. Cooper told Seinfeld he’d never eaten a waffle. “I don’t understand the point,” he said. “Texture!” Seinfeld said exasperatedly, as if he were in an episode of his sitcom. “The point is texture!”

“But there’s pancakes and pancakes are good enough!” Cooper protested. Seinfeld said that waffles were crispy. “Why do you need crispy?” Cooper wondered. “For the experience of eating!” Seinfeld said. “You are really weird!”