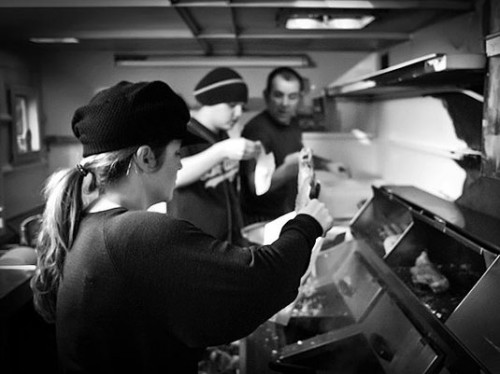 The mobile food industry industry is never one to miss a stunt and neither is Lisa Marie Presley, who was recently spotted wrapping fish and chips in the back of an East Sussex food truck called Mr. Chippy.

She hasn’t fallen on hard times or anything; it’s just a fun new hobby she’s gotten into. The King’s daughter escaped the hustle and shallowness of Hollywood two years ago by moving with her husband and three of her children to a £9 million dollar

place in the sleepy village of Rotherfield, where she made friends with Kim Scales, who owns the food truck and a local pub called The King’s Arms.

“She got on there with her son, but we were all laughing because not one of the locals realised who it was. She served one local double fishcake and chips and he didn’t have a clue that she was Elvis Presley’s daughter,” Scales told The Daily Mail. They probably have something of an inkling now that the story’s been in the papers and all over Presley’s website, though.

The amateur fish-hawker might need some practice, though. When asked if she’d hire Presley full-time, Scales laughed, “No way! She got the fish all upside down and was totally cack-handed.”