The dominant geometric shapes in most food truck kitchens are typically four sided, from rectangular cabinetry to square appliances. But in all reality the most important one is a triangle. The work triangle has always been an important element in any kitchen design and functionality, and this includes those inside of food trucks.

Now some of you may say that in a food truck you don’t always have a work triangle, but more of a work line. While this may be true in the sense of the geometry, you can look at a food truck’s kitchen layout and fudge some of the math.

Efficiency is the triangle’s main goal. Why? Simple, it keeps all the major work stations near the cook, without placing them so close that the kitchen becomes cramped. The work triangle is also designed to minimize traffic within the kitchen so the cook isn’t interrupted or interfered with.

Example of a work triangle in a standard food truck kitchen layout: 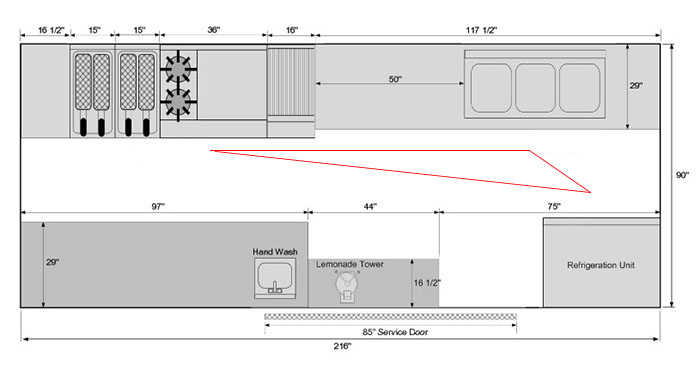 The idea of the work triangle in a food truck isn’t without its flaws though. It assumes that a kitchen will only have three major work stations and one person cooking. First of all, most food trucks feature more than three work spaces, so the regular work triangle isn’t always practical. And in many trucks, two or more people can share cooking duties. Because of these issues, don’t think you have to hold to these work triangle rules when it comes to laying out your food truck kitchen.

Remember that creating a triangle just for the sake of having one isn’t always the best thing to do when designing a food truck kitchen. If the size of your truck and the way you prepare your food doesn’t fit into a standard work triangle, you have to make do by creating the most functional food truck kitchen possible.

RELATED: Food Truck Kitchen Problems: How To Avoid Them

In most cases your menu should determine the functionality of your food truck kitchen. Not the other way around. The work triangle is not a law, only a suggestion. Although it can be a helpful tool, don’t let it inhibit you from thinking outside the triangle when it comes to designing your food truck.

We’d love to see your how you’ve laid out your kitchen. Share your images or photos via email, our food truck forum or social media. Twitter | Facebook

How To Protect Your Mobile Business From Food Truck Theft Gallery

How To Protect Your Mobile Business From Food Truck Theft

The Pros And Cons Of Diesel Engines For Food Trucks Gallery

The Pros And Cons Of Diesel Engines For Food Trucks