Carl’s Jr. is an American-based fast-food chain with locations worldwide, including in Asia and Europe. The restaurant chain was established in 1941. After more than 80 years serving up burgers and fries, the company has expanded to more than 1,000 locations in the United States and 28 countries. Today, Carl’s Jr. is among the biggest and well-recognized fast-food restaurant chains on the planet.

Is Carl’s Jr. your dream business? Here you will find some vital information on the franchise requirements, advantages, and challenges you might encounter in running your own Carl’s Jr. location. I will include all the main points you need to know before deciding whether or not this franchise is the right one for you. Now let’s dig in! 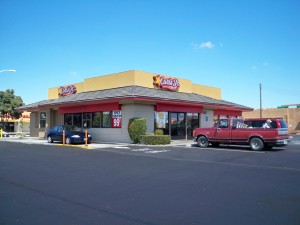 One of Carl’s Jr.’s dine-in and drive-thru branches.

As a starting point, let me provide some basic information about what you might need in terms of finances for you to launch your own Carl’s Jr. franchise. Here are some of the terms you will come across in this section:

Here is the detailed breakdown of costs associated with franchising a Carl’s Jr. location:

Carl’s Jr. had systemwide sales of $1.5 billion during the fiscal year of 2017. The restaurant chain had a $1.3 million average unit volume (AUV) in the same year. It’s worth noting that the profitability of a location can be influenced by many factors such as lease costs, labor costs, and demand for local products. 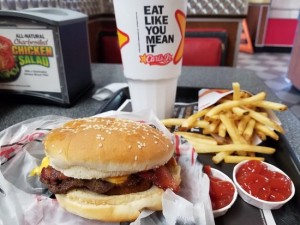 The famous burger and fries combo of Carl’s Jr.

Carl’s Jr. was founded in 1941 by Carl Nicholas Karcher. It all began when Carl and his wife opened a hot dog cart in Los Angeles using borrowed funds from their Plymouth automobile as starting capital. After a few years, they closed all their hot dog stands and moved to Anaheim, CA. From there, they began Carl’s Drive-In Barbeque, which was a full-service restaurant that quickly became a hit.

The first Carl’s Jr. restaurants were opened in 1956 in Anaheim and Brea. They were called Carl’s Jr. since they are smaller versions of Carl’s Drive-In Barbecue. By the late 1950s, there were already four Carl’s Jr. restaurants in Orange County, California. Fast forward to today, the restaurant chain has grown to more than a thousand locations in the US and other parts of the world.

Throughout its history, Carl’s Jr. has run successful advertising campaigns, including endorsements from celebrities. Most recently, model Kate Upton appeared in a TV ad as did NBA star Dennis Rodman in 2005.

How Much Profit Does A Carl’s Jr. Franchisee Make Per Year?

A QSR Magazine survey has ranked Carl’s Jr. among the fast-food chains that earn the most per restaurant. As of the year end of 2020, the burger chain ranked 31st with an average of $1.4 million per unit and a systemwide sale of $1.5 billion.

While I couldn’t find any publicly available information published about average profit after expenses, a typical burger chain will bring in 10% – 12% average profit. If this rule holds true for Carl’s Jr. (and it should) then the average annual profit per unit would be $140,000 – $160,000 per store.

There are many factors that determine how much profit a Carl’s Jr. franchise owner will generate. These factors include rent costs in your area (if your premises are leased), local product demand, labor costs, and how well you manage your business. The size of the store also matters and whether or not you include a drive-thru window.

As a potential franchisee, there’s a lot to consider before moving forward with any franchise concept. Here are some of the advantages of Carl’s Jr. as I see it.

As an essential element of its business, Carl’s Jr. ensures franchisees receive comprehensive training and support running of the burger joint. Each franchise owner has the option to be assisted by Carl’s Jr. from beginning to end of a new store process: the assistance includes site selection, restaurant design, ordering equipment, construction, and training before and after opening a location.

When considering a franchise, it is essential to learn more about the company’s financial assistance programs. Unless of course you’ve got more than $1 – $2 million of cash to invest then you can read on.   Fortunately, Carl’s Jr. has relationships with third-party sources that provide financing for the following items: franchise fees, startup costs, equipment, inventory, accounts receivable, and payroll. These sorts of franchise relationship can make accessing startup funds easier.

Carl’s Jr. has survived the test of time in the competitive quick-service restaurant market longer than many other chains as it evolved from a hotdog stand to a drive-in bbq concept in nearby Anaheim, California, and has since expanded to over 1,000 locations today.

Carl’s Jr. and Hardees have been running national advertising campaigns for decades across television, radio, direct mail, coupons, and billboards. I remember seeing Hardees ads as a kid growing up in the Midwest. It’s hard to replicate a brand that’s been around for so long and is recognized by pretty much everyone.

As an owner of a Carl’s Jr. franchise, you’ll be able to operate in a protected territory, which usually gives you some level of exclusivity in your geographic region. Franchise agreements typically provide you with exclusive rights in a given area or prohibit other franchisors from opening another franchise nearby. As a result, you will face competition from other Carl’s Jr. franchises.

Territory rights may seem like a benefit that all fast-food franchises offer, but that isn’t the case. Notably, Subway is one concept known for allowing competing franchisee’s to open up down the street. Lack of territory right combined with the low-franchise cost has resulted in numerous Subway locations shutting down over the years. Make sure you’re protected before getting involved in any franchise opportunity.

Carl’s Jr. franchises also come with certain disadvantages and risks that should be thoroughly considered before franchising. In this section, I discuss some of the issues you’ll encounter as a franchise owner of Carl’s Jr.

The burger industry is highly competitive—there are many other fast-food chains with burger-centric menus, such as McDonald’s, Burger King, and Five Guys. Although Carl’s Jr. has already been around for decades, when one thinks of burgers, they can get lost in the mix.

The other thing to consider is that future burger concepts continue popping up. Burgers, after all, are a profitable and easy meal to make that will always be in demand from consumers. You’ll need to rely on Carl’s Jr. corporate to continue innovating.

Many Locations Are Closing

Franchisees are suffering from mandatory higher wages in some states and cities. In addition, competition from other quick-service chains (and sit-down restaurants) is eating away at profitability.  The Carl’s Jr/Hardee’s chain operates very few stores of its own, instead of franchising the Carl’s Jr/Hardee’s chain to small companies, many of whom run multiple stores in the same geographical area. In some areas like Arizona, the restaurant has struggled to gain traction.

When demand drops to the point where income cannot cover expenses (rents on the West coast have increased dramatically), shutting down operations may be the only option.

Carl’s Jr. is famous for its ads depicting naked female celebrities in sexualized scenarios while eating fast food. Though the burger chain has found a way to avoid further criticism that their ads objectify women, the damage has already been done.

Franchise owners don’t have much input in the direction of the marketing campaigns. If you are not comfortable with these types of marketing campaigns, consider an alternative restaurant franchise that is more conservative in their marketing historically.

Labor shortage is the reality of the restaurant industry right now. To be clear, this is a challenge impacting all fast-food restaurants, not just Carl’s Jr.

Aside from the global pandemic, which caused many staff to not show up for work, there are all sorts of reasons for the labor shortage in the restaurant industry right now including lower wages and retirement of Baby Boomers. What makes it difficult to recruit new employees is that the restaurant industry has a poor reputation when it comes to workplace quality with long hours in hot kitchens, few benefits, and low wages.

Is the Carl’s Jr. Franchise Right For You? 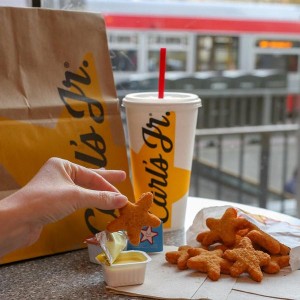 To determine if Carl’s Jr. is the right franchise for you, consider the pros and cons in a logical way. Remember that the cost of investing in a franchise goes beyond the money, because it also involves your time and effort. You’re going to be tied to this company for the next decade at least. Ask yourself the following questions can be an effective way to reflect whether or not Carl’s Jr. is worth investing:

Where Can You Find Existing Carl’s Jr. Franchise Opportunities for Sale?

There are pros and cons to this approach as well. The advantage is that you’ll be able to buy a store that’s already built, passed health inspections, and has a built-in customer base. The flip side is that you might end up purchasing a failing location that’s got a bad reputation in the location community. Not easy to turn around.

If you are considering buying an existing franchise business, some of these websites may be important to consider. Alternatively, you can search specifically for “franchise resales,” which allows you to see more local results in Google.

Is Carl’s Jr. a Cheap Franchise to Open?