How Much Does a Habit Burger Franchise Really Cost? (+ Revenue)

There’s no shortage of burger chains that you could invest in as a franchisee. The only problem is which burger franchise is worth investing your life savings and a decade of personal effort into? There are lots of options out there, but one that stands out to me is: The Habit Burger Grill.

Also known as Habit Burger for short this chain of fast casual burger restaurants is known for chargrilling made-to-order burgers. They’ve been around since 1969 and they’re gone against major burger brands in the fast-casual scene and won.

The Habit Burger Grill is now accepting franchise applications. But are you ready for this burger business? Read on to know more about this burger chain, including the advantages and challenges and anticipated revenue. Click here to take our 7-minute franchise quiz to be matched with a business opportunity based on your interests.

These are the fees and expenses to expect when you franchise The Habit Burger Grill:

According to Restaurant Business Online, The Habit Burger Grill’s revenue for the year of 2021 is $577 million.

The Habit Burger Grill started in 1969 in Santa Barbara, California. Brothers Brent and Bruce Reichard bought the location in Downtown Goleta in 1980 and started opening more locations across state. Their business venture and expansion grew to 24 units in the 90s until they sold a majority interest to Karp Reilly Group in 2007. However, the Reichard Family did not sell the Santa Barbara County locations and they continue to operate them as a family business.

The Habit Burger Grill is all about cooking 100% fresh ground beef chargrilled over an open flame. There are over 13 burgers on their online menu including special burgers such as their BBQ Bacon Char With Cheese and Teriyaki Char With Cheese.

If one is not up for any burger or sandwich, The Habit Burger Grill also offers salads such as BBQ Chicken salad, Grilled Chicken salad, Grilled Chicken Ceasar, Santa Barbara Cobb, and Garden Salad. As for the sides, the menu consists of Chicken Bites, French fries, onion rings, sweet potato fries, and tempura green beans. And to pair it off, the burger chain also sells handcrafted milk shakes.

Once both parties find that they are in agreement over franchising and interested in working with each other, you’ll fill out their franchise application and go through their Franchise Disclosure Document. To ensure brand alignment, the franchise team will review your application and meet with you to discuss the business plan and organizational chart. A background check will also be done. You’ll have a chance to talk with The Habit Burger Grill’s CEO and CFO to get a more in-depth look about the brand.

You will then visit The Habit Restaurant Support Center and get to know the brand’s executive team and learn about their roles in the business. You will get to visit different Habit Brand locations. You will also be discussing in detail about the operations and ownership. 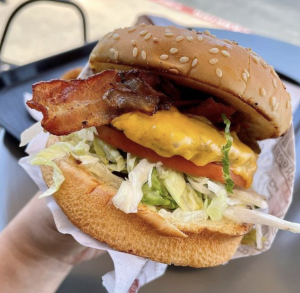 A Habit Burger with bacon.

Verification of details between both parties will be the next step. Once the agreement is executed, you’ll be part of The Habit Burger Grill’s family.

The ideal candidates that Habit Burger looks for in their franchisees are:

For international franchisees, you will also need to fill out the Franchise Inquiry Form before getting contacted. International franchisees will be handled by The Habit Restaurant Support Centers (RSC) in Singapore and Irvine, California. Available markets include Australia, China, Japan, Malaysia, Singapore, South Korea, and Thailand.

The Habit Burger Grill is owned by Yum Brands who also owns KFC, Pizza Hut, and Taco Bell. They were able to purchase the burger chain for $375 million in 2020. Last March 2022, Yum Brands also took over the remaining locations by the Reichard brothers in Sta. Barbara County.

At present, Russ Bendel is the Chief Executive Officer and President of The Habit Burger Grill. The company headquarters is located in Irvine, California.

How Much Does Habit Burger Make in Profit?

There is no updated information on The Habit Burger Grill’s profit but a report by Craft claims that in 2019, the burger chain’s revenue was $466.1 million with a gross profit of $79.7 million.

Due to the increased number of locations, revenue has grown by more than $100 million in annual sales since the date of this report. Assuming gross profits of 17.09% held steady through 2021, the company would have realized a gross profit of $96 million for the calendar year.

Advantages of a Habit Burger Franchise

Are there any advantages in franchising The Habit Burger Grill? There are! Here are a few pros you can look forward to when you decide to be a franchisee of this burger chain.

Since the beginning, The Habit Burger Grill is only known to use fresh produce. The burgers are 100% fresh ground beef without preservatives, additives, and fillers. Buns are sourced directly from a local bakery. The ahi tuna is fresh from the South Pacific and the vegetables are all sourced in California.

A brand that puts freshness first is a brand you’ll be proud of doing business with.

The Habit Burger Grill is known for many things, including The Habit Catering Truck. It’s not just any food truck but one that’s built with a kitchen that is designed to house a stainless steel chargrill so they can bring that charburger goodness everywhere they go. They cater to events such as weddings, birthday parties, and company events. You can even hire the catering truck just for a block party.

This type of marketing strategy goes above and beyond, and brings gourmet burgers to customers everywhere they go.

Aside from the United States, The Habit Burger Grill is found in Shanghai, China and Phnom Penh, Cambodia. And since they’ve opened international franchising, you might just find a Habit Burger in other countries very soon.

This expansion could only mean they are starting to build a strong global presence that can help increase their revenue in the long run. And if you franchise with them, you’ll be able to witness the growth of The Habit Burger Grill. This also means you could operate this business even if you live outside the United States.

Challenges of a Habit Burger Franchise

Franchises will have their own set of challenges, including Habit Burger even if they’ve been around for so long. Here are a few you can expect:

In 2021, a customer has filed a lawsuit against a Seattle Habit Burger franchise. The customer reports of having norovirus-like symptoms which were abdominal pains and vomiting after eating at Habit Burger. He says that the pain was so severe that he passed out in his bathroom and hit his head on the bathroom counter. He awoke with a gash in his head to which he needed seven staples.

Prior to his lawsuit, there were also claims of a customer suffering from norovirus-like symptoms as well.

Though the Seattle and King County health officials could not find the source of the outbreak, this has already managed to tarnish The Habit Burger Grill’s name. No statement was released from the burger chain’s side and we only hope that certain health measures were followed after.

It’s true that a lot of people are into burgers. It’s right up there alongside pizza as Americans’ favorite food. But this also means that the competition is tough. You already have Shake Shack, Five Guys, and In-n-Out. And though not all of these brands are available around the United States, there are other brands such as Burger King and McDonald’s that are crowd favorites.

Habit Burger will have to consistently find means to compete with these brands in order to get ahead of the competition or just to be in the same level with them.

Is the Habit Burger Franchise Right For You?

Judging from the revenue and expansion that The Habit Burger Grill is going through, it looks like the chain could be a lucrative franchise to add to your portfolio. Keep in mind though that the company is in search of multi-unit operators so if you’re strapped for cash, you may want to evaluate other burger chains as well.

If you think you can meet their financial requirements and have what it takes to run a burger chain, reach out to Habit Burger to request their FDD. Just be sure to read their Franchise Disclosure Document thoroughly and choose a good location the units have the best possible chance for success.

What is an alternative Habit Burger franchise?

One burger chain you should check out if you’re looking for an alternative to The Habit Burger Grill is BurgerFi. This burger brand is known for their organic and free-range beef, Wagyu beef hot dogs, veggie burgers, cage-free chicken burgers, and gigantic onion rings. BurgerFi is also known to be founded by gourmet chefs and has Martha Stewart sit as one of their board of directors.

To franchise BurgerFi, expect the investment to be around $629,900 to $1,011,750 which includes the one-time franchise fee of $45,000. You can also check out our full guide to franchising BurgerFi here.

According to the United States Department of Agriculture (USDA), Americans eat an average of 2.4 burgers daily. With this information, you know that investing in a reputable burger brand is viable path to business success. I hope this guide gives you a helpful understanding of what it will be like to operate The Habit Burger Grill.