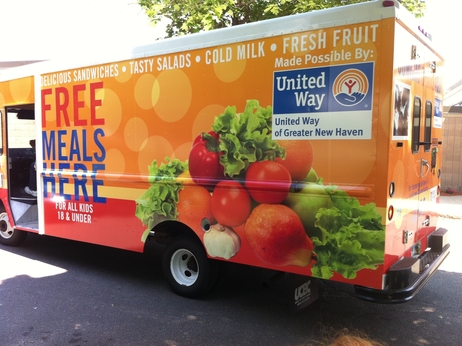 NEW HAVEN, CT – For millions of American children, the end of the school year means the end of free and reduced-price lunches that fill the gap between their appetites and their families’ budgets. It’s not that meals aren’t available during the summer – they generally are, thanks to the U.S. Department of Agriculture’s Summer Food Service Program. But getting kids to show up for those meals is harder than you’d think.

Most summer meals are served at school cafeterias where kids participate in summer camps and other activities. But that’s just a small fraction of the 22 million eligible kids nationwide.

“To get the kids from the neighborhood to come out has always been a challenge,” Tim Cipriano, executive director of school food services for New Haven, Connecticut, tells The Salt. He says there’s often a stigma attached to both the free meal and the fact that kids have to go to the school during summer vacation to get it.

Cipriano’s solution? Bring the meal to them, and make it more fun than a trip to summer school. In other words: Roll out a food truck.

Now, kids of all stripes have been lured by the ice cream truck for decades, but the rising popularity of urban food trucks hawking everything from kimchee tacos to Mexican eggrolls has given school administrators a new idea.

“It’s kind of the cool thing to do, to go to the food truck,” Cipriano says. He piloted the idea last August with a “bare-bones” setup, filling a truck with coolers and ice packs and visiting designated sites in neighborhoods where lots of children qualify for free and reduced-price lunches. The brightly painted truck handed out 17,000 meals in just 20 days.

This year Cipriano plans to serve 40,000 meals during July and August. The truck’s now got a generator and electric refrigerators. He’s serving basic bagged lunches for now — usually a sandwich, a piece of fruit, a carton of milk. But soon he hopes to add more trucks to serve hot meals, or even offer a walk-in truck with a salad bar like the ones that are popular with students at New Haven school cafeterias.

But even last year’s stripped-down version was successful enough to inspire other school systems. In Fayette County, Indiana, school food service director Siobahn Carey read about Cipriano’s truck and knew it was the solution to her rural county’s woefully underattended summer meals program. “I showed the article to my boss and I was like, ‘We are doing this!'” she says.

In the past, students just couldn’t get to the schools where summer meals were offered. Even though about 65 percent of Fayette County’s 3,900 students rely on meal subsidies during the school year, summer sites would be closed down for lack of participation. “We have such high poverty, some of these people couldn’t afford the gas to bring their child in,” Carey says.

So this year, a food truck is replacing centralized sites. The lunch menu includes sandwiches, salads, and fresh fruit and vegetables. Carey says kids line up to meet the truck when it arrives in neighborhoods and trailer parks. In the first week, the truck served more than 700 meals.

Find the entire article by TED BURNHAM at npr.org <here>