American Truck Makes are Most Common in Mobile Food Industry

One of the questions we are often asked by the readers of Mobile Cuisine Magazine is what type of trucks business owners use to create their mobile kitchens. To help answer this question, we ran a poll which was targeted at the mobile food truck owners specifically. Our goal was to find out what the current popular vehicle makes are driving around the cities of the United States. We provided a list of seven options…

We left the poll open for two weeks and were rather impressed with the number of votes we received. 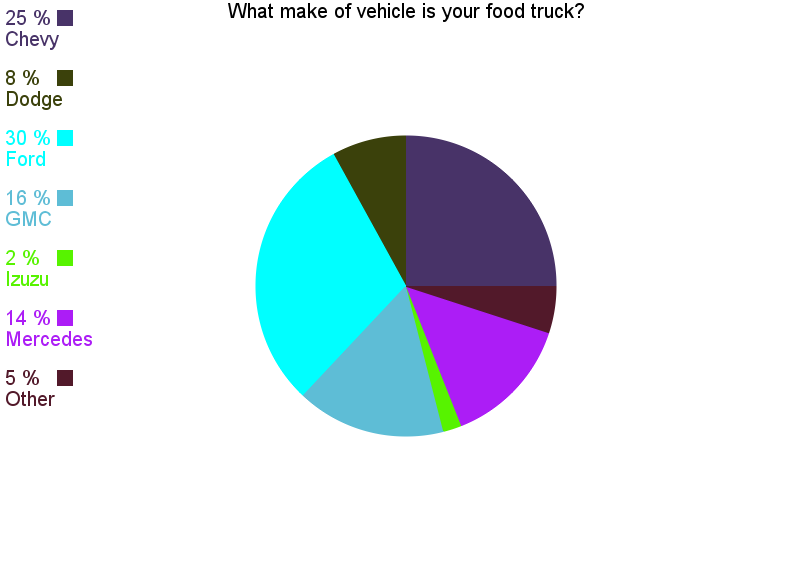 What we found is that of the responders General Motors and Ford were by far the largest percentage of the truck platforms that have been used to create their mobile eateries. By combining the results from Chevy and GMC, General Motors trucks lead the pack with 41 percent. Individually, Ford trucks were shown to be the largest make used by voters followed by Chevy at 25 percent and GMC with 16 percent.

Through additional research we did find that most food truck owners purchased or lease used vehicles which could have led to the reason that so many of the trucks on the road are American made. As the food truck movement continues to grow across the country and more truck manufactures create platforms that would suite a food truck,  we may start to see the number of American made trucks drop as an overall percentage, especially with all of the marketing work Mercedes has done with their Sprinter.