The City of Chicago Shows Hypocrisy in its Food Truck Permitting

This just in, Chicago is now allowing food truck owners to cook on board their kitchens on wheels. This step promptly removes the Windy City from the list of the top 50 most populous cities in the country that prohibit these mobile bistros from providing their customers with fresh made to order meals (if you weren’t aware Chicago was the only city on this list).

Time out, time out, scratch that thought. 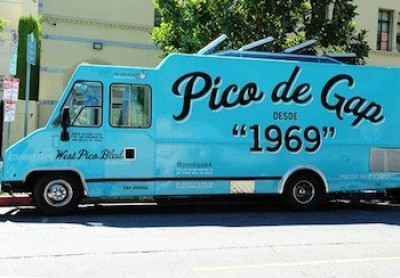 Unfortunately, we were mistaken by news that Chicago had allowed the corporate retail giant The Gap to cook on board their food truck while promoting their new jean brand. Pico de Gap is visiting the city on a nationwide promotional tour to expand awareness of their new 1969 Fall Denim Collection, by selling inexpensive tacos from a truck. The truck, with its kitchen headed by Rick Gresh, Executive Chef of David Burke’s Primehouse, is in town through Sept. 5.

We at Mobile Cuisine Magazine find it odd that the city would issue a special events permit to allow a truck from outside the area come in and do exactly what Chicago food truck owners have been pleading to do for over the last year.

In the meantime, the Chicago food truck ordinance, which was created by Gastro Wagon owner Matt Moroni, sits in committee waiting for the aldermen to come back from their well-deserved summer vacation (please do your best to hold back the laughter) so that they can vote on it.

We feel confident that the ordinance will pass, however it still has a strong opposition lead by a group of Chicago restaurateurs who feel that mobile food trucks present competition that could end up shuttering such establishments such as Keefer’s.

Glenn Keefer’s goal is to block City Hall from creating an “unlevel playing field” for their brick-and-mortar businesses. The other hurdle the ordinance faces is that the committee that will cast their votes for or against the ordinance is chaired by Chicago restaurant Ann Sather owner Tom Tunney even though accusations of conflict of interest are still being leveled against the alderman.

As a group whom has organized Chicago food truck events all summer (Food Truck Tuesdays in Lincoln Park and Chicago Food Trucks in Grant Park), we certainly have a stake in the issue. We feel that by continuing their lack of foresight to quickly pass the food truck ordinance the city council continues to show that “Chicago Politics” is not a thing of the past.

All it takes is a large corporate interest such as The Gap to want to use our streets to market their new products by cooking on a truck and a permit is issued promptly. Should a local small business owner without a huge lobby such as National Restaurant Association knocking on their doors, they allow an ordinance to sit in limbo, until there is enough public outrage that may just cause them to lose their next election.