There are an estimated 10,000 food vehicles which navigate the streets of Los Angeles County. On Tuesday, all five of the L.A. County supervisors gave preliminary approval for a new ordinance that would require mobile food vendors to submit travel routes to give county health inspectors the ability to conduct surprise inspections. 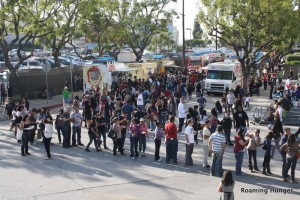 The results of these new inspections would provide the county with enough information for them to release grades, similar to the grades restaurants currently receive, for each of these vendors. With this approval, the ordinance must be ratified by another vote, sometime next week. Once ratified it would go into effect 30 days after the final vote in unincorporated areas of the county; local city councils would need to ratify the new grading plan for it to be effective within city limits.

The first phase of the plan will expand the grading program to about 3,200 full-service catering vehicles. The second phase would begin next July and will expand to about 2,800 more limited food facilities, such as hot dog and churro carts.

The proposed ordinance covers almost any truck selling any type of food, including motorized and non-motorized vehicles, food carts and “any vehicle from which animal food, bakery products, fish, shellfish, fruits, vegetables, meats, poultry, preserves, jelly, relish, milk or other dairy products, food or food products, ice or beverages, whether in bulk, canned, wrapped, bottled, packaged, or any other form, are sold.”

Currently food trucks are required to have the health department conduct a single annual inspection. Once finalized, food trucks would also be required to submit to at least one additional field inspection per year. The reviews conducted will give health inspectors the ability to close trucks down if they do not receive a grade of C or higher. They will be making sure the trucks follow the same regulations as brick and mortar establishments in regards to public and personal safety. Hygiene standards are also reviewed, so inspectors will make sure food is stored properly and the kitchen and serving areas are kept clean.

According to Matt Geller, vice president of the Southern California Mobile Food Vendors Association, “It brings more legitimacy to an industry that is fairly new in the mainstream,” Surfer Taco truck owner, Moises Alvarado stated, “Some people think maybe we don’t even get a health permit now they’re going to know just how clean we are. I think it’s going to mean more business for us.” In addition to customers knowing what grades each truck received, the placards will establish that the trucks are being regulated and are safe to eat from.

Health departments around the country have been hesitant to allow mobile food vendors permitting to sell in their municipalities. The primary reason they give is that since the trucks are mobile there would not be any way for them to track these operators down to give them surprise inspections. Apparently these officials have not read our article on how to follow them. Mobile Cuisine Magazine believes that by having a travel itinerary requirement in Los Angeles Country as a new precedent, we may see another surge of cities around the country authorizing new food trucks to begin selling their mobile fare.