Tom Colicchio, famed chef and owner of numerous brick and mortar establishments has joined the ranks of many of his fellow restaurant owners in showing their disdain for one of the most popular trends to hit the food industry in decades. 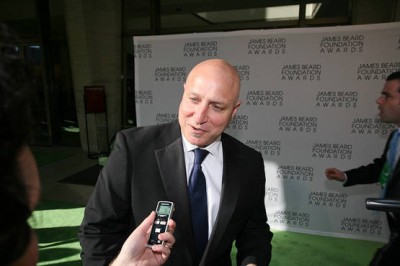 According to a report from Metromix at the James Beard Awards, when asked what he thought the worst current restaurant trend was, he responded with, “I think about this. Has to be the mobile restaurant thing. You know what I’m talking about.”

To follow up with their original question the reporter asked if he thought that kitchens should be larger than a truck. This time Chef Colicchio took a laughing jab at the mobile food industry by responding, “No, but I think they should have to pay rent.”

Rent? Is this how you truly feel chef? This ridiculous comment would be the equivalent of taxis paying rent at every stop they make. Just as those who traverse the city streets of many of the country’s major cities picking up fares to deliver people to their next destination, food trucks pay the same types of fees, and in many cases these fees are larger than the cost of a cab’s medallion.

The annual fees and permitting for these trucks can be as high as $10,000, and licensing is required from every city the food trucks park in to sell their cuisine. These may not be equivalent to what rents are for restaurants across the country, but at the same time, the owners of these vehicles do not have the ability to make nearly as much as brick and mortar restaurants can in the cities they travel in.

Outside of this jovial dig, the worst thing to arise from Chef Colicchio’s comments is the appearance of his own hypocrisy. It was only a few weeks ago when the chef provided a themed menu for the marketing of the HBO fantasy series Game of Thrones. How did they plan to market their message and share his meals? Yep, you got it, FOOD TRUCKS!

The branded trucks were located in New York and Los Angeles for two weeks (we are assuming rent free) serving 300 free meals a day. The menu was “inspired by the rich depictions of the banquets featured in the new series – such as roasted rabbit, spice roasted duck, and venison.”

It is unfortunate that your opinion has changed now that you are now longer being paid to promote these rolling bistros. It does concern us and we hope that the next time one of your shows such as Top Chef plan to use food trucks as a challenge to your culinary contestants, you pony up and pay the owners of the trucks rent for their use, out of your own pocket.

Better yet, if this scenario does arise, to prove you aren’t the hypocrite you currently appear to be, make sure you remove yourself from the episode, so you don’t have to subject yourself to these non-rent paying gourmet kitchens on wheels.