The just released top 100 list of Movers and Shakers for Fast Casual has two concepts which have made their way to the mobile food industry. 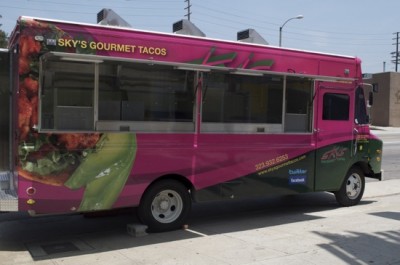 For the past 19 years, Sky’s founder and chef Barbara Burrell has sustained her eatery’s quaint, delicious fare—articulated as “Mexican with a splash of soul”— in L.A.’s Pico-Fairfax area. However, June 2010 saw Burrell expand her brand to four wheels, specifically with a vibrant fuchsia food truck that hit the streets to serve a smaller slice of Sky’s menu items: specialty tortas, burritos and, of course, tacos

In July 2007, three college graduates decided to open a restaurant in the Washington, D.C., neighborhood of Georgetown. Just four short years later, Nicolas Jammet, Jonathan Neman and Nathaniel Ru, founders of Greens Restaurant Group LLC, have expanded the concept to Virginia and, this past year, launched a mobile cuisine vehicle selling frozen yogurt and salads. Sweetgreen and its founders have been featured in publications such as Spin, Star and US Weekly, and in September were featured on the CBS series “Unplugged, Under 40.”

“We’re more than just a restaurant; we’re a lifestyle brand. We like to call it the sweet life, and we like to have fun with it,” said Ru. The average age of Sweetgreen’s corporate staff is 27, and employees are encouraged to partake in yoga classes at the office or rock climbing excursions as a group. The company is aiming to have 12 open locations by 2012 and has built the concept by focusing on local and sustainable ingredients.

We would like to congratulate Sky’s Gourmet Taco’s and Sweet Green on showing how easy taking a fast casual concept onto the roads can be. You can bet that more of these concepts will start leaning toward this trend in the upcoming years.