How Much Will it Really Cost to Open a Yum Yum Donuts Right Now?

Donut consumption is projected to reach 207.31 million in 2024. That’s a lot of Americans who eat on donuts for breakfast or special treat and an important data-point to understand if you’re getting into the donut business. You can be confident in increasing demand over the next few years.

One way to capitalize on this trend is by franchising a Yum Yum Donuts. They may be considered a small donut business in comparison to the big names like Dunkin’ dominating the United States. But they’re popular enough in California and considered a classic. They’ve been around since 1971 and they still manage to wow their customers with their extensive list of donuts on their menu.

How much does it cost to open Yum Yum Donuts? You’ll need a liquid capital of about $200,000 to open this franchise. Expect the initial investment to be $71,700. This donut shop has been franchising since 1973 so there’s a long track record of success.

Still interested in understand the fees and business model of Yum Yum Donuts? To find out if this donut chain is the right franchise for you, take our 7-minute franchise quiz.

Aside from the fees, expect to also pay 5% of royalty fee.

Do note that the financial requirements and fees mentioned are unofficial data since Yum Yum Donuts has not disclosed their franchise information. To get a more accurate estimate, it is advisable to contact Yum Yum Donuts directly by filling up their form here or by phone at (626) 964-1478.

Not much is known about Yum Yum Donuts’ official annual revenue but according to public data, the donut chain brings in $26,754,000 annually. Since there are 94 total units operating this works out to $284,617 in gross revenue per unit.

While the gross revenue estimate does look low, keep in mind donuts are high margin products. Many donut shops are able to achieve a profit margin between 50% – 75%. This is phenomenal profit for a food business and can drop significant net-profit to the bottom line.

Yum Yum Donuts was founded in 1971 by Philip C. Holland at a former Orange Julius location in Highland Park, California. Holland was interested in the donut business because of the time he spent working in North Carolina with Vernon Rudolph who is known as the founder of Krispy Kreme Donuts. The interest turned into a business with over 94 stores to this day strewn across California.

The donut chain is considered the largest privately owned donut shop in the United States. However, Yum Yum Donuts is small in comparison to big donut chains such as Dunkin’ Donuts and Krispy Kreme Donuts with the latter two having more than a hundred locations in the United States and a strong global presence.

But despite being small, the menu that Yum Yum Donuts carries a diverse menu from chocolate to lemon, coconut, blueberry, cinnamon, maple, vanilla, glazed, pineapple, and many more.

Aside from donuts, they also have bagels, muffins, and croissants which are available in sweet and savory flavors. For instance, you can have them in chocolate chip, banana nut, and cinnamon or choose to have Quesadilla Bread, jalapeño, French onion, and more.

Want to Open a Franchise? Take Our 7-Minute Quiz to Find Out The Business That’s Right For Your Budget and Interests.

And the list doesn’t stop there. Yum Yum Donuts also has a wide variety of sandwiches offered such as breakfast sandwiches, deli sandwiches, and melts. They also serve salads for those looking to eat healthily. Who knew!

As for the beverage menu, they have plenty to offer with drinks as well. From fresh juices, to fountain soda drinks, coffee, tea, and smoothies, Yum Yum Donuts carries them.

How Much Does Yum Yum Donuts Make in Profit?

Since Yum Yum Donuts has not publicly released their financial records, there is no limited financial data as to how much Yum Yum Donuts make in profit. After all, privately held companies do not need to disclose detailed revenue numbers like a publicly traded company would need to report. But if you’re wondering how much donut shops make a year, this depends on a lot of factors such as the cost of your ingredients, location of your shop, and competition.

According to experts we interviewed, a standard shop with high foot and vehicular traffic will make about $120,000 to $150,000 annually. But again, keep in mind there are a wide-variety factors can affect your donut shop’s profit, including customer service, marketing strategy, and product quality.

I’ve mentioned how Yum Yum Donuts has a lot of flavors from sweet to savory in addition to classic glazed ones. And let’s face it, who doesn’t love options. This not only piques your customer’s interest but this also allows them to keep on coming back for more to try every flavor. This can also lead to increased top-line revenue numbers for the operator.

And aside from the donuts, customers also have other options to try bagels, sandwiches, muffins, and croissants. Got a customer looking for a low-carb and healthy option? Yum Yum Donuts has salads too. The extensive menu is what you can offer to the people in your community when you bring Yum Yum Donuts to them. 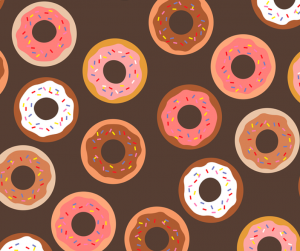 Yum Yum Donuts has been around for 50 years making donuts so you know that they’re good at what they do and that they have a proven and tested business model. They’re also very well-known throughout California.

Yum Yum Donuts is known to operate 24 hours. Though some stores may not follow the same number of store operating hours because of the pandemic, a lot of Yum Yum Donut stores are still open late at night. Having a business that’s open 24 hours can help you cater to customers who like eating in the middle of the night which can also lead you to generate more sales for your business.

Donuts have proven themselves to be a profitable business during good economies and bad. No matter the economic cycle, consumers see value in donuts. I can go to my local donut shop and pick up a bakers dozen of classics like sprinkles or glazed for around $15. Then I can bring the box home for the family to enjoy for an affordable breakfast treat, even it if isn’t that healthy. The fact is donuts represent value for families of all income levels.

In order to make a proper decision in franchising Yum Yum Donuts, you’ll also need to weigh the cons of having this donut shop as your business. Here are a few challenges you can expect:

All the Yum Yum Donut shops are located in one state: California. For years it has only been located in California and there doesn’t seem to be any plans to expand its presence outside the state.

Hopefully, Yum Yum Donuts would consider opening franchising outside California so more people can enjoy their donuts. And maybe in the future, they could branch out to other countries.

Yum Yum Donuts is known for their delicious donuts but in some locations, there have been complaints about bad food and bad service. A review on Yelp said that the service is cold while another reported racial discrimination.

When you decide to franchise Yum Yum Donuts, be sure to keep a close eye on what kind of service your business is offering to your customers and also make sure that proper training is given. A bad reputation can lead to slowing down businesses.

Yum Yum Donuts gives a small mom and pop shop kind of vibe and though that’s not necessarily a bad thing, it does feel like it can go through a little upgrade in logo design. That’s a personal opinion though. Obviously, longtime customers love the branding. But, it could create challenges drawing new customers into the store.

Is the Yum Yum Donuts Franchise Right For You?

Yum Yum Donuts has made a name for themselves through the years and if you join them, you’ll be part of a tight knit franchise family. However, there’s still the question of whether or not they’re open to franchising so it’s best to contact them and talk to them personally to get a hold of their updated Franchise Disclosure Document. Don’t forget to read through all the details for any important fees you may have missed.

What is an alternative Yum Yum Donuts franchise?

One donut shop to look into for franchising is Duck Donuts. This donut chain originated in 2007 in Duck, North Carolina. Since then they’ve grown to over 102 stores in the United States and have opened locations in Dubai, Saudi Arabia, and Puerto Rico.

To franchise Duck Donuts, expect to invest $351,164 to $541,44 and the initial franchise fee to be $40,000. Do note that these fees are for United States locations only and costs will depend on the size of the location.

And there you have it. If it’s a donut place you’re looking for, be sure to check out Yum Yum Donuts if you want to operate a shop in California. With a menu that has a variety of flavors, you’re sure to impress your customers and have them come back for more.