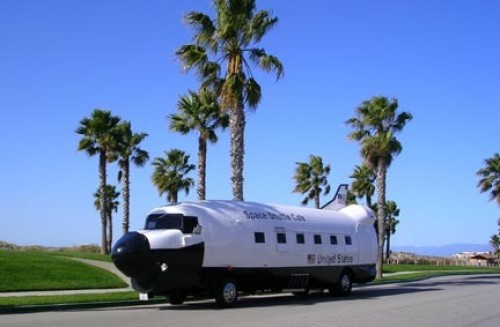 So we’ve all heard about busaurants by now, but have you heard of the Space Shuttle Cafe? It currently resides in sunny Southern California and is now the closest thing to an operational Space Shuttle in the country. The thing is…it’s for sale.

This kitchen is built inside the only road worthy DC3 Airplane licensed for street use in the world that we know of, painted in the theme of NASA’S Space Shuttle.

This is a once in a life time opportunity to own not only a great money making business, but a piece of American History also. This aircraft was built in 1944 and flew during World War II. It also flew as an airliner during the 50’s and 60’s and was alleged to have been hijacked to Cuba during that time.

It was converted for street use in 1976, mounted on a GMC Bus frame. We purchased the vehicle in 2001 and converted the empty shell into this completely self-contained commercial kitchen.

If you are interested in purchasing this truck (it’s only 150K) on eBay, check out the ad <here>

We’d like to thank our friends at Circle the Wagons for giving us the heads up on this story.